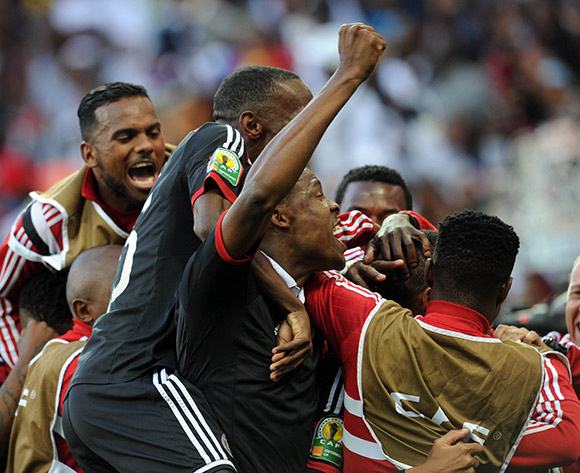 Welcome to as-it-happened coverage of the CAF Confederation Cup final, first leg match between Orlando Pirates and Etoile du Sahel from the Orlando Stadium in Soweto.

These two great clubs - one from South Africa and the other from Tunisia in the North of the continent - are set to battle for the right to be crowned champions in Africa's second-tier club tournament.

Here's the first-leg action as it happened...

90+4' - Full time, Pirates 1-1 Etoile - Done and dusted in Soweto, Pirates have been held 1-1 by the Tunisian visitors, who are now clear favourites headed into the second leg in eight days' time.

90+3' - This has been a frustrating night for the most part for Etoile, but they will certainly be the happier of the two teams at full time.

87' - GOAL! Pirates 1-1 Etoile - Jemal scores from close range, with Pirates unable to clear their lines from a free kick! What a crucial goal that could be in deciding the destiny of the Confederation Cup trophy!

83' - Pirates sub - Issa Sarr replaces Maselesa in the midfield for the home side.

80' - Matlaba with a hugely ambitious long range effort that goes off target. Just 10 minutes left, it's looking like a home win in the first leg for Bucs.

77' - Pirates defend well from a corner kick and look to hit on the counter, but their move runs out of steam.

74' - Yellow card - Ben Amor is booked for an elbow to Gabuza in an aerial challenge.

72' - Jemal shoots from long range and it's way off target.

69' - Still no subs used in this game, it's getting to the point where both teams could use some fresh legs.

66' - Frustration really growing for Etoile's players and technical team. But they can't afford to lose their cool, there's still more than a quarter of the game to play.

65' - Yellow card - Brigui is booked for objecting the referee's decision not to give a penalty a moment earlier.

64' - Bounedjah tumbles in the box and again it's nothing doing from the referee.

60' - Lahmar shoots for goal from a free kick and hits the crossbar! Ovono looked to have had it covered, but still a great effort from the Etoile man.

59' - Yellow card - Sangweni booked for a clumsy challenge on Abderrazzak.

57' - Etoile have gone off the boil in the last few minutes, could they be struggling with the effects of altitude.

55' - Bounedjah tumbles in the Pirates box, but the free kick goes to the home side, much to Benzarti's frustration.

53' - Pirates take a free kick quickly and Makola has a crack at goal, good save from Jebali! That was almost 2-0 to the Buccaneers.

49' - Matlaba with a good clearance as Etoile look for an equaliser early in the second half.

46' - Kick off, second half - Back underway after the interval, no substitutions from either team.

45+2' - Half time, Pirates 1-0 Etoile - We've reached the interval at Orlando Stadium, with the Buccaneers in the ascendancy thanks to Gabuza's cracking goal.

45' - Gcaba makes a vital challenge to prevent Bounedjah having a sight of goal. Lahmar then shoots wide from long range.

41' - Etoile coach Faouzi Benzarti is becoming increasingly frustrated by the decisions from the officials.

39' - Lahmar shoots for goal from the free kick and Ovono has to make a sharp save at his right-hand post!

38' - Yellow card - Ntshumayelo is booked after giving the Tunisian side a free kick in a good attacking position.

36' - GOAL! Pirates 1-0 Etoile - Pirates break the deadlock, with Gabuza cracking home a shot from a tight angle with his left foot! Great finish from the in-form striker!

34' - Matlaba and Gabuza get in each other's way as they both look to get onto Erasmus' through ball... a great chance wasted for Pirates!

31' - Bounedjah threatens to beat Ovono to another awkward ball... the Algerian forward is proving a real handful for the Pirates defence.

28' - Etoile almost grab the opening goal, with the visitors springing away on a counter which sees Bounedjah beat Ovono to the ball but poke his effort wide of the target!

27' - Etoile's first corner kick of the match is well defended by Bucs, with Sangweni winning a good header at the back post.

25' - Still a sense that both sides are playing within themselves, with the hosts now unable to find the kind of space and time they were enjoying earlier in the match.

23' - Midway through the first half, still goalless between Pirates and Etoile du Sahel.

22' - Yellow card - Abderrazzak is the first player into the referee's book, for a late challenge on Gabuza.

18' - A good spell of possession for the Tunisian team, they are beginning to play with a little more freedom after establishing themselves in the game.

15' - Bucs corner kick from Erasmus passes over the heads in the box and drifts out for a throw-in on the opposite side.

14' - Jele overlaps on the right and plays a low cross, which is brilliantly cleared by Jemal.

12' - Sangweni's long ball sends Gabuza away on the counter attack and striker's pull-back from the by-line is just behind Erasmus!

11' - Etoile have the ball in the net with Msakni heading from from a set piece, but the offside flag is up... big let off for the home side!

9' - Matlaba with the first shot in anger, having a right-footed crack from long range, but the ball drifts high and wide.

6' - Etoile very content to sit deep at this early stage. They have pretty much all but one of their outfield players in their own half when Pirates have the ball.

4' - Matlaba looks for a surging run down the left, but he's quickly crowded out by red shirts.

3' - Pirates goalkeeper Ovono gets his hands on the ball from an Etoile free kick.

1' - Kick-off, Pirates 0-0 Etoile - We are underway at Orlando Stadium! Pirates wear all-black, Etoile are in red and white.