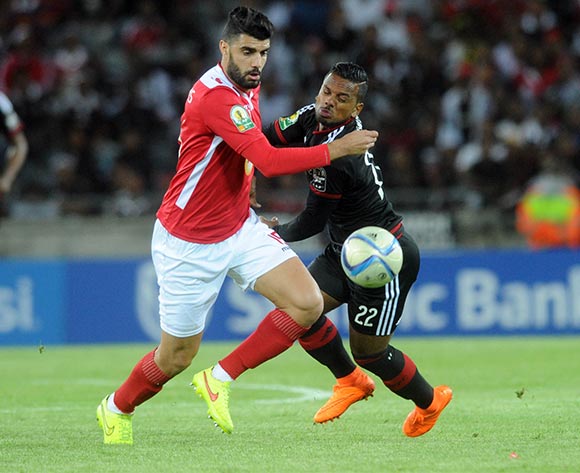 Etoile du Sahel have the edge in the CAF Confederation Cup final after holding Orlando Pirates to a 1-1 draw in the first leg in Soweto on Saturday evening.

The Tunisians will now head into the return leg in Sousse next weekend knowing that a clean sheet will secure them the trophy.

Thamsanqa Gabuza scored a beauty to put the Buccaneers into the lead at Orlando Stadium, but a late equaliser from Ammar Jemal completely changed the complexion of the outcome.

Pirates settled the quicker of the two teams, but it was Etoile who thought they had claimed the lead in the 11th minute when Mohamed Msakni headed home from a free kick, but the flag was raised for offside.

Bucs also had a couple of nervy moments at the back when goalkeeper Felipe Ovono was caught out of position by Baghdad Bounedjah, but luckily for the hosts the dangerous Algerian was unable to find the target.

Pirates then broke the deadlock in the 36th minute through a superb goal from Thamsanqa Gabuza, who ran onto a pass in the box, held off a defender and fired an unstoppable left-footed shot into the top corner from a tight angle.

Etoile nearly claimed an equaliser a couple of minutes later through Hamza Lahmar, who shot direct at goal from a free kick and forced Ovono into a sharp save at his right-hand post.

The first clear chance of the second half went the way of Bucs, with a quick free kick giving Mpho Makola a sight of goal, but his low shot was well saved by goalkeeper Mohamed Jebali in the 53rd minute.

On the hour mark the Tunisians almost restored parity with another free kick from Lahmar, whose sweetly-struck effort hit the top of the crossbar, though Ovono appeared to have it covered.

Pirates looked to be headed for victory, but with just three minutes of added time remaining they conceded a sloppy goal from a free kick, with Etoile captain Ammar Jemal scoring from close range after the hosts were unable to clear their lines.