Aces up to second 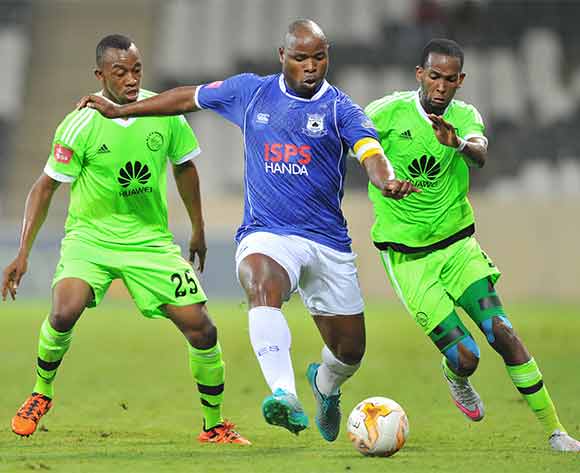 Mpumalanga Black Aces did just enough to edge out Ajax Cape Town 1-0 in an exciting Absa Premiership game at Mbombela Stadium, the win taking them second on the standings.

Both sides were guilty of a host of missed chances in a game that was evenly contested, Ajax unlucky to not at least earn a point.

For the most part, the opening 20 minutes of the game saw the match at a stalemate as the two teams battle for midfield supremacy.

There was however a flurry of chances around the 11 minute mark. The first opportunity saw Musa Lebusa’s pass towards his own goal being intercepted by Judas Moseamedi, but Ajax keeper Anssi Jaakkola moved swiftly off his line to make a fine save.

More chances followed, at the other end, as Nathan Paulse went close before Abubaker Mobara’s effort hit the woodwork.

As the game moved towards the first quarter mark, the Urban Warriors kept the pressure on, Erwin Isaacs missing one good chance when firing wildly over goal before another opportunity ended with his shot being deflected off the upright.

Aces could have been ahead on the half hour mark when Collins Mbesuma arrived at the near post to get onto an inviting low cross, but Jaakkola made a brilliant save to tip the ball around the post.

Bantu Mzwakali forced Aces keeper Shu-aib Walters into saving with his feet after a great run into the box before AmaZayoni’s Lehlohonolo Nonyane squandered two chances, the second of which saw him leaning back and putting his shot over an un-minded goal after the Ajax defence had been torn apart.

But when the Cape side left their defence wide open once more, the hosts were to capitalise as Lebohang Manyama ran through unchallenged on goal, beating Jaakkola before working the ball to Mbesuma for a close range finish, 1-0 on 42 minutes.

Mbesuma was to have the first chance after the break, but was unable to take advantage of another slip by Lebusa as the defender recovered in time.

The pace of the game however was to slow significantly after the break, chances far more rare than the opening 45 minutes.

The next opportunity was to arrive in the 70th minute, with Ajax substitute Prince Nxumalo arriving unmarked in the box, only to flash his header marginally wide.

Nxumalo was to miss another good opportunity 10 minutes later, the Urban Warriors unsuccessfully trying to put the Aces defence under some late pressure as AmaZayoni played out the game without too many problems.