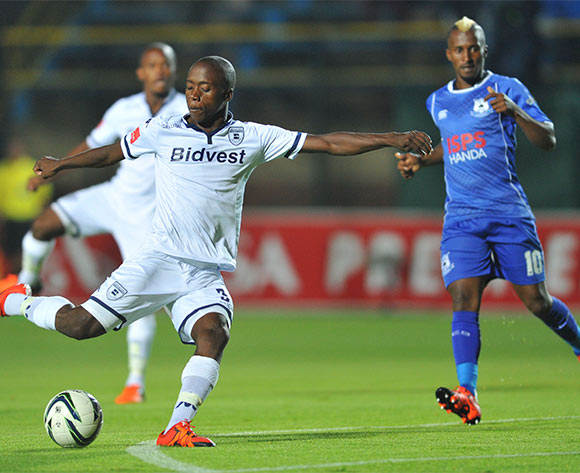 Ben Motshwari of Bidvest Wits challenged by Bongelethu Jayiya of Black Aces during the Absa Premiership match between Bidvest Wits and Black Aces at the Bidvest Stadium in Johannesburg, South Africa on January 15, 2016 ©Samuel Shivambu/BackpagePix

A brace from Collins Mbesuma sent MP Black Aces to the top of the Absa Premiership after beating Bidvest Wits 2-1 in a league match at Bidvest Stadium on Friday night.

Mbesuma scored the winning goal, his tenth of the season, eight minutes from time to see Aces come from behind for their ninth win in the league which sees them on 30 points from 14 games, one ahead of second placed Wits.

Wits started positively and opened the scoring in the tenth minute when Thulani Hlatshwayo headed home a Daine Klate free-kick, 1-0.

Wits controlled the rest of the half, but were constantly thwarted by Aces goalkeeper Shu-Aib Walters.

Five minutes into the second half Wits came close to scoring their second when James Keene met a Jabulani Shongwe cross, but his header struck the crossbar.

In the 67th minute Aces almost scored when Mbesuma met a cross from Bryce Moon, but his header went just over the crossbar.

Mbesuma made no such mistake in the 82nd minute when he met a long ball from Limbikani Mzava and muscled his way into the box before firing past Moneeb Josephs, 2-1.