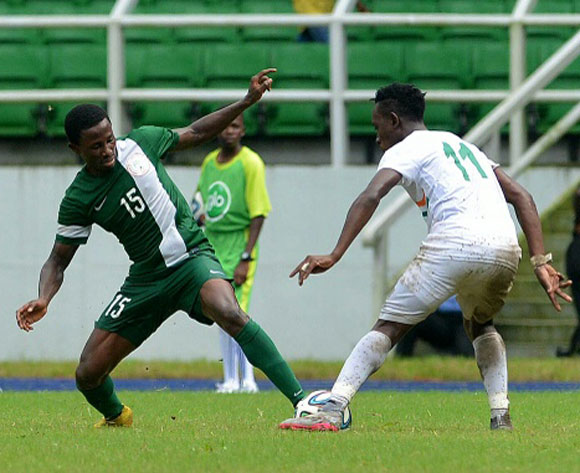 Sipper Chima Akas (left) in action for Eagles vs Niger in September. Both teams clash in the 2016 CHAN on Monday

The Mena are featuring in this competition for the second time after they made their debut in the 2011 edition in Sudan.

Incidentally, they stopped Nigeria to qualify for the 2011 CHAN.

They reached the last-eight that year before they lost on penalties to hosts Sudan.

Niger have named a squad of experienced players like Kofi Dankwa and Issiakou Koudize. Both defender Dankwa from Sahel FC and AS GNN midfielder Koudize featured for Mena when they played at the 2013 AFCON in South Africa.

An international since 2008, Kofi is better known in Niger as ‘Kowa’ and has played in South Africa, Tunisia and India. The daring player, who could play as a central defender or defensive midfielder, scored in both legs of the qualifiers against Togo.

First-choice goalkeeper Alhassane Alzouma is the oldest player on the squad as he is 33 years old, while AS Douanes striker Adebayor Zakari is the youngest at 19.

In September, they lost 2-0 in the Eagles main team in a friendly with goals from Ahmed Musa from the penalty spot and a late effort by Belgium-based Moses Simon

They held hosts Ethiopia to a 1-1 draw in a warm-up game.

The North Africans won the 2011 CHAN on their debut and in fine style as they were clearly the best team on parade in Sudan.

Zouheir Dhaouadi was the MVP of the competition with full internationals like Oussama Darragi and Youssef Mskani part of the team.

Full international striker Ahmed Akaichi, who featured for Tunisia at last year’s AFCON in Equatorial Guinea, will be one of the stars of the Carthage Eagles to watch out for.

Local coach Hatem Missaoui has been in temporary charge of the team in the absence of experienced French coach Henryk Kasperczak, who is recovering from surgery.

They finished a disappointing second with four points from four matches in a mini-league qualifying series that involved winners Morocco and 2014 champions Libya, winning only a game and losing two.

The Syli National are making their debut at CHAN.

They defeated Liberia 4-2 on aggregate in the preliminary round of the qualifiers, before they edged past Senegal on the away goals rule in the first round.

Guinea won the first leg 2-0 at home, before they lost the reverse leg in Senegal 3-1.

The players and officials were paid $13,000 each for booking their ticket to Rwanda 2016

Players from the country’s leading clubs AS Kaloum and Horoya form the bulk of the squad to Rwanda.

Like Nigeria, they trained in South Africa for this tournament. They played a 1-1 draw with Cote d’Ivoire in a warm-up game in Johannesburg.