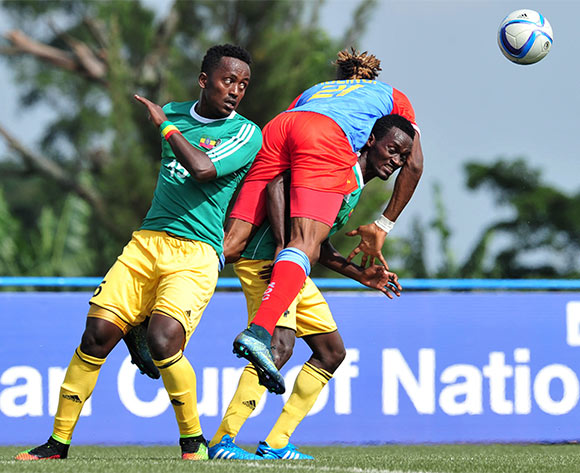 Asechalew Tamene of Ethiopia battles with Jonathan Bolingi of DR Congo during the 2016 CHAN Rwanda, match between DR Congo and Ethiopia at the Huye Stadium in Butare, Rwanda on 17 January 2016 ©Muzi Ntombela/BackpagePix

Welcome to our live coverage of the African Nations Championship Rwanda 2016.

Follow all the action as it happens in Kigali, Butare and Gisenyi.

Group A kicked off the tournament this Saturday at Amahoro Stadium in Kigali, with hosts Rwanda beating Côte d’Ivoire 1-0. Gabon and Morocco played out to a goalless draw.

We brought  you live updates of the Group B clash between the Democratic Republic of Congo and Ethiopia. The Leopards emerging comfortable 3-0 winners on the day.

90' - Three minutes added to the second-half

88'- DRC ending the game on the front foot with a succession of corner-kicks, Ibenge's troops asserting themselves as one of the favourites for the crown.

84' - Miche replaces the star of the show - Luvumbu

75' - Alemu on Panom off for Ethiopia

73' - Free-kick for Ethiopia ... Mamo fires at goal and its an easy save for Matampi.

70' - And we are into the final 20 minutes of regulation time,  Ethiopia trying everything to get back in the game but the DRC are holding firm and looking increasingly dangerous on the counter.

57'  - GOAL! Surely that is the knockout blow! Luvumbu is at the centre of everything, the midfielder with the cross...Meschack with the tap in, 3-0.

54' - Ethiopia chasing shadows since the break, DRC full of confidence continue to press forward, aiming to put the result beyond any doubt.

47' - GOAL! What a start to the half by the Leopards who are all over Ethiopia. Luvumbu with a power header from close range to double their lead 2-0.

47' -  And the DRC are on the offensive from the onset forcing Mamo into a good save.

44' - GOAL DRC! Lusadisu with the opener from a Luvumbu cross... the striker rises above his marker before heading past the Ethiopian stopper at his near post. Well deserved goal The Leopards

42' - CHANCE! Great chance for the DRC, Lomalisa breaks down the left flank before playing a pin-point ball to Bolingi who somehow completely miss-kicks with the goal at his mercy.

32' - SAVE! Luvumbu's left-footed shot from range causes Mamo some trouble but in the end the Ethiopian keeper does well to save with his legs.

30' - Half-hour played, a lot of attacking intent by both teams but no goals to write about as yet.

25' - Another corner-kick for Ethiopia, near post run by Dejene who rises highest, but the ball is a tad overcooked - so close to making contact.

24' - Lok tries his luck from an acute angle but its an easy save for Matampi who gets down well to his left.

18' - Corner-kick for Ethiopia comes to nothing, game starting to open up as another quick break by the Ethiopians is thwarted by the quick thinking Matampi.

14'- This time its Lusadisu who tries his luck, but again too much power and over the crossbar.

13'- Yellow-card Tamene for a cynical foul just outside the area, another scoring opportunity for the DRC.

10' - Free-kick for the DRC on the edge of the area following a foul on Bolingi.

9' - Positive start by both teams who will be eager for an early goal to settle some nerves.

4' - Free-kick fired in by Ethiopia. but its an easy catch Matampi who is sporting a similar hairstyle to Robert Kidiaba.

3' - There has been a lot of rain in Butare, but the artificial pitch has soaked up most of the water, still a bit damp under foot.

2' - Democratic Republic of Congo in blue and red attacking the goal to the left, Ethiopia in green tops with yellow shorts and socks playing from left to right in the first-half.