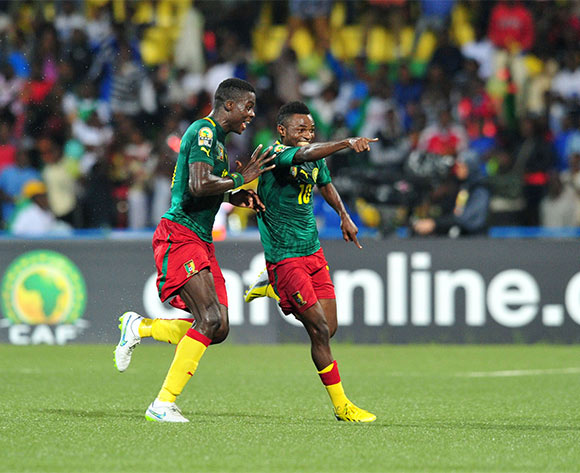 Emane Yazid Atouba of Cameroon celebrates his goal during the 2016 CHAN Rwanda, match between Angola v Cameroon at the Huye Stadium in Butare, Rwanda on 17 January 2016 ©Muzi Ntombela/BackpagePix

A stunning free kick by Yazid Atouba Emane midway through the first half saw a 10-man Cameroon hold on for a hard-fought 1-0 win over Angola at CHAN 2016.

The Group B clash started off slowly and there was not much to celebrate inside the opening ten minutes as both teams felt each other out and did not take too many risks.

But late in the game, and especially after Cameroon defender Joseph Ngwem was sent off, Angola were all over Cameroon and should have found their way back into the game given all the chances they had, with livewire substitute Mateus especially impressive.

Angola did have a half chance in just the opening few minutes after a botched Cameroon clearance, but Adriano Duarte could pick out the corner with his curled attempt at goal.

But after 21 minutes, Cameroon won a free kick in a very good area just in front of the D-line of Angola’s 18 area. Atouba Emane did very well to curl the set piece around the wall and into the corner of goal to make it 1-0.

A great attacking move down the left wing by Angola in the 34th minute saw an excellent cross just fail to meet the head of an Angolan striker and Cameroon were able to clear the danger.

Angola had a good chance just before half time when a long range shot took a deflection, but the pace of the ball slowed down and Cameroon keeper Nyame was able to save easily.

Five minutes into the second half and Angola’s dangerman Adriano Duarte saw his powerful ground shot saved in what was a good passage of play from Angola.

Angola continued to push hard for an equalizer and on the hour mark big centre back Fabricio got on the end of a deep cross, but his strong header flew just over the bar.

Then in the 66th minute Cameroon had a defender sent off as Ngwem lunged into a tackle carelessly and was given his marching orders.

As a result Angola upped their attack and began asking questions of the Cameroon defence with substitute Mateus twisting and turning his way through the Cameroonians.

Angola should have got the leveler in the 84th minute when they created space and Miguel cut inside on the left wing and fired a shot at goal only for the Cameroon defence to block the goal-bound shot.