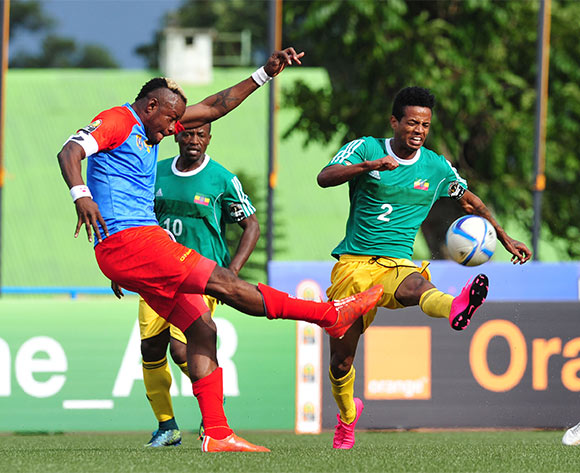 Joel Kimwaki of DR Congo clears the ball Tekalin Dejene of Ethiopia during the 2016 CHAN Rwanda, match between DR Congo and Ethiopia at the Huye Stadium in Butare, Rwanda on 17 January 2016 ©Muzi Ntombela/BackpagePix

DR Congo will look to put on foot in the quarterfinals of the 2016 African Nations Championship when they face Angola in their second Group C match. Kick-off at Stade Huye in Butare is set for 15h00 CAT on Thursday afternoon.

The Leopards eased to a comfortable win in their opening match on Sunday, defeating Ethiopia 3-0 to establish themselves at the top of the Group C standings. They lead Cameroon – who beat Angola 1-0 – on goal difference.

DRC’s goals were scored by Guy Lusadisu, who netted a brace of goals, and Elia Meshak.

Angola, meanwhile, will be looking to bounce back following their loss to the Indomitable Lions. The Palancas Negras felt they should have gotten something out of the game, with Cameroon playing the final quarter with just 10 men after the sending off of Joseph Ngwem.

"We showed too much respect to our opponent early in the game, and were not masters of our game," Angola coach Jose Kalamba said in the aftermath.

The Southern Africans need a positive result against the DRC if they are to remain in contention for a place in the next round.

DRC and Angola have met in 11 previous official international matches, according to FIFA statistics. Each side has four wins to their name, while the Leopards have scored more goals (13 to 10).

The teams’ only previous meeting in a major tournament was in the group stage of the 2006 Africa Cup of Nations in Egypt: they played to a goalless stalemate in Cairo.