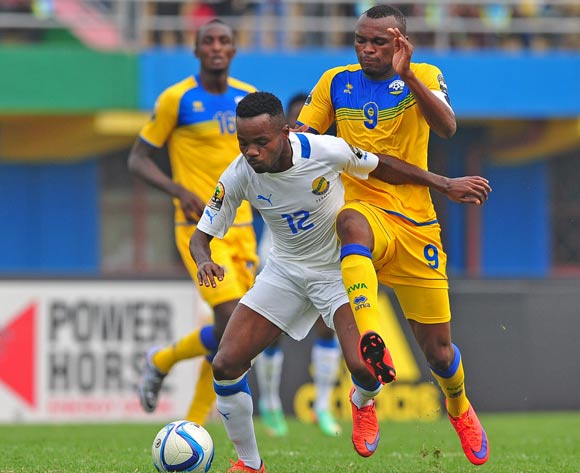 Cedric Ondo Biyoghe of Gabon is fouled by Jacques Tuyisenge of Rwanda during the 2016 CHAN football match between Rwanda and Gabon at the Amahora Stadium in Kigali, Rwanda on 20 January 2016 ©Ryan Wilkisky/BackpagePix

Cote d'Ivoire and Rwanda grabbed valuable wins on Wednesday to head into the final round of Group A 2016 African Nations Champions (CHAN) fixtures in pole position.

The Amavubi confirmed their place in the knockout stages with their second win of the tournament - a brace from Ernest Sugira leading the hosts to a memorable victory over Gabon at the Amahoro Stadium in the nation's capital.

Aaron Boupendza pulled a goal back for the Panthers in the second-half, but Tchen Kabi's dismissal soon after ended their hopes of a comeback, leaving them with what is now a must win game against the Ivory Coast this Sunday.

Later in Kigali, the Elephants edged Morocco 1-0 thanks to a Krahire Zakri penalty on the cusp of half-time.

Mourad Batna was the only shining light for the Atlas Lions, the attacker unlucky not to find the net in the second half.

On Thursday, Group B action resumes in Butare. First up, an impressive DR Congo side tackle Angola before Cameroon clash with Ethiopia.