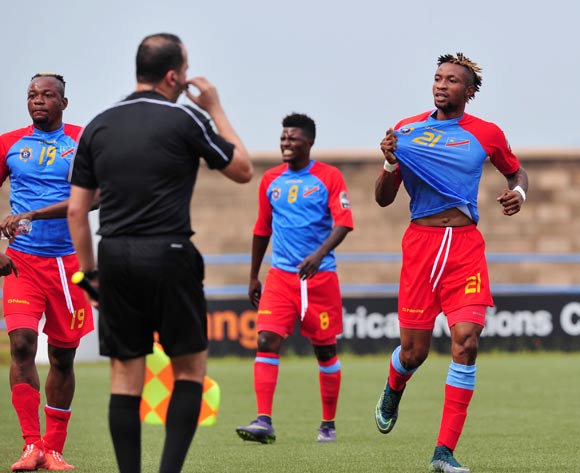 Jonathan Bolingi of DR Congo celebrates his goal during the 2016 CHAN Rwanda, match between DR Congo and Angola at the Huye Stadium in Butare, Rwanda on 21 January 2016 ©Muzi Ntombela/BackpagePix

An impressive attacking display by DR Congo saw them beat Angola 4-2 in a thrilling six-goal encounter in their CHAN 2016 Group B encounter on Thursday.

DR Congo took the lead in the 8th minute following a corner kick. A header towards the far post saw Angola's keeper fumble the ball under pressure and the ball spun off his back and back into play from which Nelson Munganga pounced and poked home the game's opening goal.

Just a few minutes after the goal, Angola came close to a leveller when a cross reached captain Osvlado only for him to slice his shot off the side of his boot from a very good position.

DRC went 2-0 ahead after 18 minutes when Meshack Elia volleyed home from close range. Inside the danger area, Meshack first mis-hit a volley, but the ball landed kindly for him to have as second attempt and this time he buried the volley.

It was 3-0 after 38 minutes when Jonathan Bolingi cut inside from the right and onto his left foot, then he fired at goal but the should never have gone in at the near post, but poor goalkeeping from Mavanga saw the ball slip into the net.

DRC had a few more chances to take the score even higher late in the half but a combination of poor decision making and mis-directed shooting saw the chances wasted.

Ten minutes into the second half, Angola had a shot on goal after good work by Yano. But Matampi made a good save low at his near post.

In the 65th minute, DRC nearly fond goal number four as Baometu cut inside Miguel on the right wing and powered his way toward goal, but his strong shot at goal was well saved by Mavanga.

With fifteen minutes to go, Angola pulled a goal back through Gelson Dala. Angola created a wonderful attacking move that sliced open the DRC defence and Gelson finished expertly with his left foot.

DRC make it four in the 82nd minute when Bope netted with a fantastic header at the back post, lobbing the ball back over the keeper following an excellent deep cross.

But pretty much from the kick off Angola fire back to make it 4-2. A brilliant through ball to Yano who rounded the 'keeper before sliding the ball back across goal only for a defender to carry the ball over the goal line in an attempted clearance.

In the end DRC were fully deserving of their win given the manner in which they played, attacking football with a physical edge.