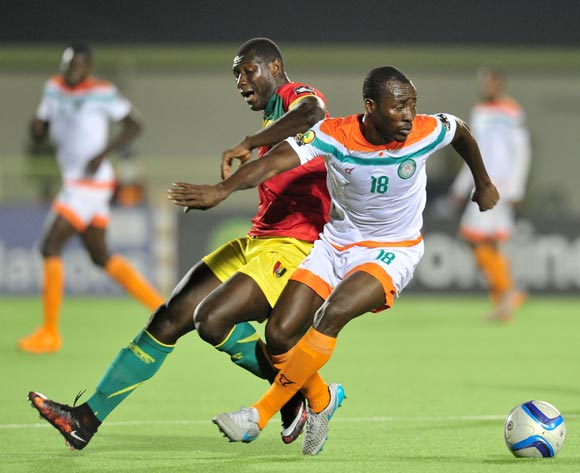 Kofi Dankwa of Niger challenged by Alseny Camara of Guinea during the 2016 CHAN Rwanda, match between Niger and Guinea at the Stade de Kigali in Kigali, Rwanda on 22 January 2016 ©Muzi Ntombela/BackpagePix

Welcome to our live coverage of the African Nations Championship Rwanda 2016.

Follow all the action as it happens in Kigali, Butare and Gisenyi.

Group C saw Niger draw with Guinea 2-2 while earlier today we saw Tunisia and Nigeria play to a 1-1 draw.

90' Sylla is a headache for Niger in the dying stages of the tie, he's making good runs into the box but he lacks support. Niger 2-2 Guinea.

86' Free kick for Guinea on the dge of the box as Sylla is fouled. Yousouf receives a yellow card.

85' Guinea enjoying ball possession and are looking at scoring their third goal, however, Niger are defending in numbers.

75' Adebayor's shot goes wide after turning his marker inside out, his final shoit is disappointing.

70' Less than 20 minutes to go and Guinea look to be on the driving seat as far as the score is concerned but they're doing a lot of defending as Guinea is pushing for an equaliser. Sankhon foring a save from Issaka, pin point free kick. Niger 2-1 Guinea.

68' Bangoura on for Sylla

63' Substitute Thiam with a great shot but the keeper, makes a wonderful save to deny him. In their follow up, Sylla takes on his marker and delivers a pin point cross but it goes astray.

60' GUINEA SUB: Thiam on for Youlla

52' Camara nearly scores for Guinea as Camara sees his shot sailing wide off the far post. The match gaining the momentum with both sides looking to grab a win.

45' Guinea looking to test the new keeper, Issaka but Sylla is wasteful, his shot goes wide.

43' Good game of football, a chance goes begging for Guinea. Niger's keeper, Alzouma, down receiving attention from the medics.

35' Guinea in control of the proceeding but we're yet to see a goal in Kigali. Alseny Camara is fouled but is back on his feet. Guinea 0-0 Niger. Offside trap played by Niger.

30' Adebayor fouled by Camara, they get a free kick and the keeper collects with ease. Shehu once again comes to the rescue of Niger after a swift counter attack by Guinea. Youssouf winning the battle in the midfield for Niger. Guinea gets a set piece but Sankhos hits it badly.

20' Sylla with a good run for Guinea but his Niger's Shehu clears the danger. Niger 0-0 Guinea. Camara elbowed but no caution yet.

15' NIGER SUB: Ismael on for Kader

15' Niger taking the game to Guinea but are wasteful in front of goal having missed two great opportunities. Camara looks to give Niger problems,. Niger down to 10 men and they just cleared a dangerous ball in the penalty area.

05' Free kick for Niger outside the box, Alzouma, the keeepr punches it away. Niger down to 10 men after Garba was injured.