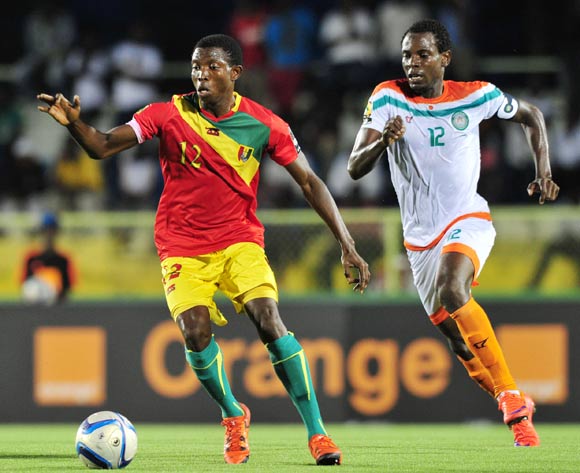 Aboubacar Sylla of Guinea challenged by Souleymane Sakou Dela of Niger during the 2016 CHAN Rwanda, match between Niger and Guinea at the Stade de Kigali in Kigali, Rwanda on 22 January 2016 ©Muzi Ntombela/BackpagePix

In an entertaining CHAN Group C encounter on Friday night, Niger and Guinea played to a 2-2 draw at the Stade Regional Nyamirambo in Kigali.

Although the game was mostly dominated by fouls, Niger were dealt a huge blow when they had to make three forced substitutions due to injuries on Idrissa Garba, Kader Amadou and Moussa Alzouma just before the interval.

As early as the fifth minute, Niger were awarded a free kick but it went straight to the keeper Aziz Keita, who made a fine save by punching the ball away from danger.

Despite a number of attempts at goal after 10 minutes of play, Guinea failed to convert, with Alseny Camara ‘Agogo’ wasting one of the chances in the box.

After 30 minutes of action, Mena broke the deadlock when Syli Nationale failed to clear a corner kick and a loose ball fell into the path of Youssouf Alio, who slotted it home easily in the 36th minute.

However, their celebration was short lived as Guinea pulled a quick goal back following a counter attack. Sylla received a ball in the box from the left flank and he turned with a powerful shot to beat Alzouma a minute later.

In the second stanza, against the run of play, Niger were ahead when substitute Moussa Issa converted from a corner kick as Guinea failed to clear the danger.

After 63 minutes of action, substitute Mohamed Thiam unleashed a powerful shot but the keeper Issaka made a wonderful save to deny him.

In the 78th minute, a powerful shot in the box by substitute Aboubacar Bangoura made it 2-2 after a well delivered cross down the right flank.

Guinea now have two points from two draws and will face Nigeria in their final group match, whilst Niger, who have one point, are set to meet Tunisia, who also have one point, meaning it is yet to be decided who joins the Super Eagles in the next round.