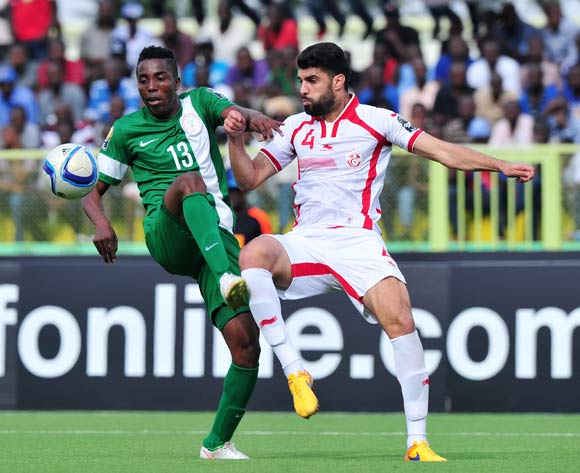 Chisom Chikatara of Nigeria battles with Zied Boughattas of Tunisia during the 2016 CHAN Rwanda, match between Tunisia and Nigeria at the Stade de Kigali in Kigali, Rwanda on 22 January 2016 ©Muzi Ntombela/BackpagePix

Despite their 1-1 draw against Tunisia in their second match on Friday afternoon, the Super Eagles of Nigeria have retained the lead in Group C of the 2016 CHAN.

In the wake of the draw, Sunday Oliseh’s side are yet to seal their qualification for the next round, thus leaving the group yet to be decided.

Nigeria, Guinea and Tunisia all have a chance to reach the knockout stages – meaning Group C is set to go down to the wire.

HOW EAGLES RATED AGAINST TUNISIA

Chisom Chikatara scored his fourth goal to give Nigeria the lead against the run of play, but Tunisia drew level through danger man Ahmed Akaichi after 70 minutes.

The Super Eagles have four points from two matches, while Tunisia are second on two points together with Guinea.

Syli National failed to bag a win against the struggling Niger as they bounced back to secure a point in their 2-2 draw in the other group encounter on Friday evening.

Looking at the Menas, they played well against Guinea bounced back from their 4-1 defeat at the hands of Nigeria.

They took the lead on two occasions, but their defence needs a major overhaul as they failed to hold onto their advantage.

Join us for live updates on Saturday for the two games in Group D.

Guinea now have two points from two draws and will face Nigeria in their final group match, whilst Niger, who have one point, are set to meet Tunisia, who also have two points.

With Tunisia and Guinea having two points apiece and Niger with one point, Nigeria is the only team with four points and this leaves the group open to be decided next Tuesday.