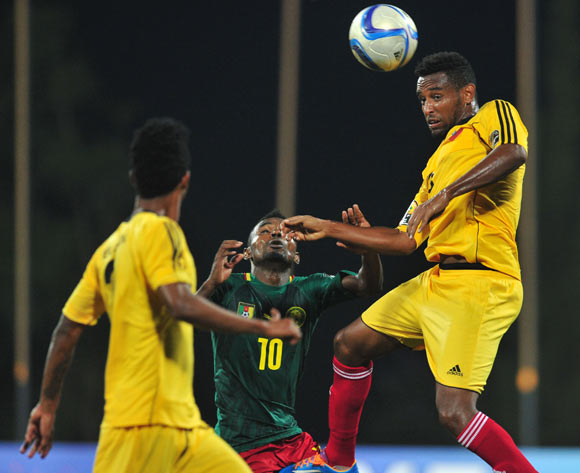 Gathuoch Panom Yiech of Ethiopia during the 2016 CHAN Rwanda, match between Cameroon and Ethiopia at the Huye Stadium in Butare, Rwanda on 21 January 2016 ©Muzi Ntombela/BackpagePix

Ethiopia will look to sneak into the 2016 African Nations Championship quarterfinals when they meet Angola for their final Group B match in Kigali on Monday, kick-off at 16h00 CAT.

The Wayla Antelopes have yet to win at the CHAN tournament this year, with their opening 3-0 loss at the hands of DR Congo followed by a goalless stalemate against Cameroon on Thursday.

The result leaves the East Africans placed third in Group B with just one point. Their hopes of advancing to the quarterfinals remain alive, but their fate is not in their own hands.

In order to qualify, Ethiopia must beat Angola and they need DRC to beat Cameroon as well – this combination of results would leave the Wayla Antelopes and Indomitable Lions tied for second place on four points each.

The head-to-head record between the teams is irrelevant because they drew 0-0, meaning it would come down to goal difference to separate the teams. As it stands, Cameroon’s goal difference is +1, while Ethiopia’s is -3.

Their coach Yohannes Sahle insists that the East Africans will fight until the final whistle in order to progress into the knockout rounds.

"We know it will be a very tough game laced with a lot of implications mathematical, as we are needed to score many goals while at the same time hoping DR Congo beat Cameroon, but like I have earlier said we are going to fight until the last minute of the game without any fear," Sahle said after the stalemate with Cameroon.

As for Angola, they have been eliminated from quarterfinal contention after losing to Cameroon (0-1) and DRC (2-4) in their first two matches. They only have pride to play for, but a win would at least see them avoid the wooden spoon and leapfrog Ethiopia into third.