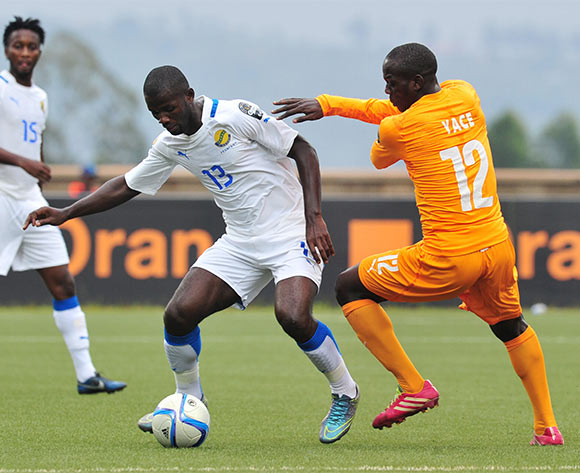 Franck Perrin Obambou of Gabon challenged by Okpekon Marius Yace of Ivory Coast during the 2016 CHAN Rwanda, match between Ivory Coast and Gabon at the Huye Stadium in Butare, Rwanda on 24 January 2016 ©Muzi Ntombela/BackpagePix

Group A at the 2016 African Nations Championship was wrapped up on Sunday afternoon, with Ivory Coast joining tournament hosts Rwanda in advancing to the quarterfinals after they beat Gabon 4-1.

Amavubi stumbled to a 4-1 defeat at the hands of Morocco, but their earlier wins – including one against the Elephants – ensured they finished at the top of the log and will face Group B’s runners-up (likely to be Cameroon or DR Congo) in Kigali on Saturday.

In Butare, Ivory Coast scored three goals in the second half against a Panthers team which put up a good fight for roughly an hour before being outclassed by Michel Dussuyer’s men.

In Kigali, Morocco overpowered the tournament hosts with a stunning first half showing in which they netted four goals, including a brace from the excellent Aziz Mouaoui.

The final standings saw Rwanda and Ivory Coats in six points each (with the hosts on top thanks to a superior head-to-head record), while Morocco were third on four points and Gabon finished with one point.

Group B will be wrapped up tomorrow with simultaneous games in Butare, where Cameroon take on DR Congo, and in Kigali, where Ethiopia battle Angola.