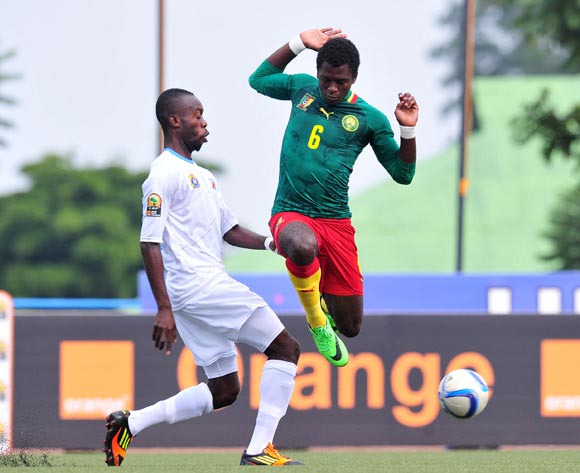 Anthony Kevin Mfede Junior of Cameroon challenged by Sedrick Ngulubi of DR Congo during the 2016 CHAN Rwanda, match between Cameroon and DR Congo at the Huye Stadium in Butare, Rwanda on 25 January 2016 ©Muzi Ntombela/BackpagePix

Cameroon beat the Democratic Republic of Congo 3-1 to advance into the knockout stages as 2016 African Nations Championship (CHAN) - Group B winners.

Man of the match Yazid Atouba, Ngamaleu and Samuel Nlend found the back of the net for the Indomitable Lions who were well deserved winners on the day.

Having made nine changes to the team that trumped Angola 4-2, it was always going to be difficult for The Leopards. Atouba handed Cameroon the lead at the break, but DR Congo equalised soon after the interval through Jean-Marc Mundele.

That was as good as it got for Florent Ibengé  and his troops with two superb goals by Ngamaleu and Nlend taking the game away from the 2009 champions in Butare.

Over in Kigali; a brace from Manuel Ary Papel guided Angola to a 2-1 win over Ethiopia. For Palancas Negras the win was a mere consolation as they exited the competition alongside Ethiopia who still harboured knockout ambitious heading into the tie.

Seyoum Tesfaye scored the Walias only goal of the game.

Cameroon face Ivory Coast in the knockout stages while defeat for DRC books them a showdown against neighbours and competition hosts ,Rwanda, in the next round.

Both those games will take place on Saturday, 30 January.