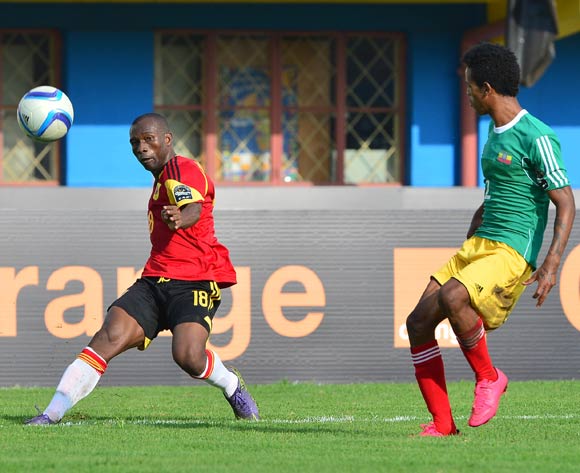 Mingo Bille Zalata of Angola cross ball challenged by Tekalign Dejene of Ethiopia during the 2016 CHAN football match between Ethiopia and Angola at the Amahoro Stadium in Kigali, Rwanda on 25 January 2016 ©Gavin Barker/BackpagePix

Two goals from Manuel Ary Papel saw Angola beat Ethiopia 2-1 in Kigali, but it was not enough as Cameroon and DR Congo go through to the quarterfinals from Group B which ended on Monday.

The match started slowly with very few scoring chances in he opening stages as both teams got physical with each other on a greasy surface after rainfall during the day.

Just after the 15 minute mark Ethiopia asked a few questions of Angola's defence on set pieces, but on two occasions they got caught offside from dangerous looking free kicks.

The first real chance of the game arrived in the 27th minute when Yano slipped a pass to Gelson, who let the ball run across his body and fired in a left footed shot which just flew past the upright.

Just a minute later Natael's marauding run down the left for Angola saw him enter the danger area and fire at goal, but the ball was blocked by goalkeeper Kidane's legs.

In the 35th minute, Ethiopia got into a good position and a powerful shot at goal came from Assefa on the left side of the 18 area, but it flew straight at Signori who saved easily.

Ethiopia came very close to a goal in the 67th minute when Eliyas used a back heel to set up a shot at goal for skipper Seyoum Tesfaye. He got his shot on goal, but the keeper saved well.

Then Angola took the lead through that man Manuel Afonso with his second on the day. Once more he finished well from close range after a delightful cross into the 18 area.

Two minutes later and Ethiopia levelled when skipper Seyoum Tesfaye hit a fantastic driven shot at goal from a tight angle after he collected a free kick at the far post.

The game ended with some excitement at either end but there were no more goals and it ended 2-1 to Angola with both teams crashing out the tournament,