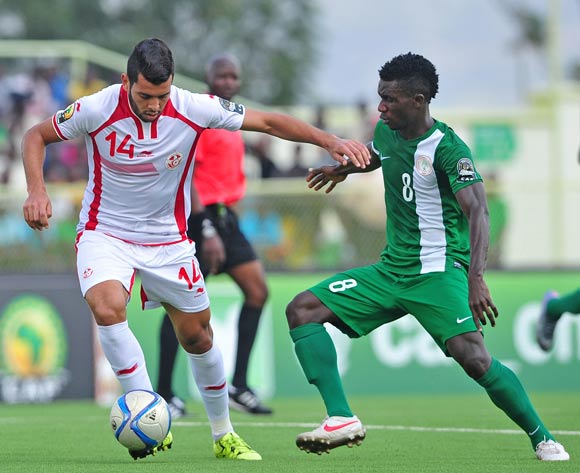 Ifeanyi Matthew of Kano Pillars (right) is expected to be one of the players from the domestic league to open Nigeria's training camp in Abuja on Sunday.

90+4 - Nigeria crash out, Guinea go through. It's a massive upset. Guinea finish as runners-up in Group C and will face the winners of Group D

90 - CHANGE - Therno Camara in, Thiam Mohammed out for Guinea

87 - Time wasting by Guinea, who can blame them?

83 - The game is held up, before it restarts

81 - Sankhon free kick is stinging but it is directly at Ezenwa and Tunisia are now 4-0, they are having a big party

Guinea goalkeeper Keita has not made a save so far...It's being a poor attacking display by Nigeria

75 -BOOKING - Osas Okoro is booked , so too Soumah of Guinea

71 - The minutes are ticking away for Nigeria...

70 - Free kick to Guinea round their corner flag

67 - Nigeria's Onyedikachi's header inside the box flashes across Guinea goal

65 - Free kick to Nigeria after foul on Onyedikachi

61 -CHANGE - Adeniji out, Bright Onyedikachi in for Nigeria

59 - Chikatara has still to find his feet in this contest

57 - Goal kick to Nigeria as another Guinea attack breaks down

53 - Bature Yaro shoots at Guinea goal, but it is way off target,and moments later Adeniji is stopped inside the Guinea box

52 - Corner to Nigeria as they press for an equaliser

46 - Second half restarts, Chikatara in for Paul Onobi, Nigeria change

Nigeria are now facing elimination...If the results stand like this after the second half, the Eagles will be catching the next flight back home with Guinea and Tunisia heading to the quarterfinals

44 - GOAL! Guinea take the lead, Sankhon is the goal scorer for Guinea

39 - Nigeria are more settled in this game now

37 - Osas Okoro fires at Guinea goal, he was too selfish as he ought to have played with a better positioned teammate

36 -Guinea stay in the attack

32 - Guinea concede a corner after they thwart Adeniji

29 - GUINEA CHANGE - Skipper Sory Bangoura in for Alseny Camara, the defender not the striker

28  - BOOKING - Obaroakpo is booked for a foul on Alseny Camara, free kick against Nigeria

25  - Nigeria's Alimi handles the ball inside the box, but the ref turns a blind eye to that infringement, a big let-off for Nigeria

23 - Guinea drill a shot from distance, it's powerful but not on target

22 - Usman's eventual free kick bounces off the Guinea defensive wall for a throw-in to Nigeria, but nothing comes out of this

17 - Adeniji forces a throw-in around the Guinea corner flag, moments later, Usman is brought down on the edge of the box, free kick for Nigeria in a very promising position

15 - Guinea are bossing the ball possession

12 - Guinea are full of running, but so far the Nigeria defence are keeping them out

10 - Guinea are very physical and even a big striker like Adeniji is finding the going very tough...

9 -TUNISIA have taken the lead against Niger after five minutes of action in Kigali, and as it stands they move to the top of the group

6 - Nigeria defence clear the danger and concede a corner

4 - Guinea push forward again, they are bright and lively

2 - Nigeria defend an early Guinea attack and monents later, Nigeria's Osas Okoro handles the ball and a free kick to the syli National

AS Kaloum have eight starters for this clash, the other three players are from Horoya

The ref is El Jaafari from Morocco

The two combatants step out - Guinea in red tops with a slash of yellow and green, yellow shorts, while Nigeria will sport their away all-white jerseys

We have a handful of Nigeria and Guinea fans at the Umuganda Stadium here to root for their darling teams,the trumpets sound, the African drums boom...

Match venue Rubavu is on a volcanic region and it is believed to be a lot colder than Kigali,where both teams have been based for their first two group games

But this news is no news with the country's teams in recent months - the U20s, U17s and U23s were all paid their entitlements just at the last rounds of their various tournaments and interestingly they all went on to win these competitions.

Nigeria coach Sunday Oliseh stirred up some controversy in yesterday's media briefing when he claimed his team are "a car driving on empty tank" who could "break down soon" in reference to the fact that they are yet to be paid any allowances or bonuses since their arrival in Rwanda.

The Syli National have effected three changes including skipper Sory Bangoura being axed.

Guinea are joint second with Tunisia after two draws – 2-2 vs Tunisia, 2-2 vs Niger

Nigeria are top of the group with four points from two matches – 4-1 vs Niger, 1-1 vs Tunisia

The game is a mess. How can you tell me that your an attacking minded tactician with no real treat going forward even when your 1 nil down? Stephen keahi has always been my best indigenous coach ...well done boys