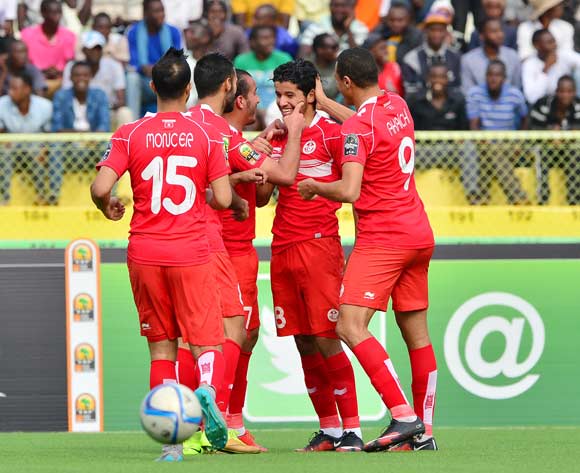 Saad Bguir of Tunisia (second from right)| embraced by teammates after scoring during the 2016 CHAN football match between Niger and Tunisia at the Stade de Kigali in Kigali, Rwanda on 26 January 2016 ©Gavin Barker/BackpagePix

Welcome to the live coverage of the final round of Group C games at CHAN 2016 where Niger take on Tunisia at the Stade Régional Nyamirambo in Kigali, kick-off is at 16h00 CAT.

Both teams can still qualify for the knockout stages. A draw could be enough for Tunisia, but Niger will need a victory to stand any chance of progression. Tunisia and Niger supporters will be keeping a keen eye on what's happening in Gisenyi where Nigeria tackle Guinea; the West African teams are not guaranteed a place in the next round as yet and will need a win to guarantee their spot in the quarter-finals. This is effectively a knockout game for all four teams, exciting stuff!

90+4' - Full-Time: Niger 0-5 Tunisia! Tunisia are into the next round alongside Guinea. Nigeria and Niger OUT!

90+1' - GOAL! Essifi puts the icing on the cake, slipping the ball under the onrushing keeper!

81' - ITS A ROUT! Corner-kick played to Ben Amor who curls his shot into the top left hand corner - WHAT A STRIKE.

78' - GOAL! Akaichi with the knockout blow! Rounds the Niger goalkeeper before sticking the ball in the back of the net.

74' - RED! Youssouf Oumarou Alio receives a second yellow card and is off.

68' - Not the same intensity by either side in the second stanza thus far.  Niger need a goal quickly if they were to harbour any hopes of progression; with Guinea leading Nigeria that looks very unlikely...

56' - CHANCE! Free header for Mossi, but Jeridi is well positioned to gather with ease.

52' - Moctar replaces Seyni who was guilty of missing a few chances in the first-half.

49' - Mossi gets up well, but sends his header attempt just wide! Good chance for Niger.

47' - Early chance for Tunisia through Ben Amor who forces the goalkeeper into a good save.

46' - The Ethiopian Referee gets  the second-half underway

39' - GOAL GOAL! Bguir with another sharp finish. Captain Maaloul picks out the unmarked Esperance forward who finishes with aplomb; firing into the roof of the net.

37' - Seyni with another miss! Adebayor with a delightful ball into the area, Seyni completely miss-kicks!

36' - Things have calmed down a tad following a frantic opening half-hour.

30' - At the other end Niger continue to create chances, Seyni the last to squander a gold opportunity - heading over from close range.

28' - CHANCE! Akaichi picks out Bguir who's diving shot is well saved by Ayouba; good save.

26' -Adebayor picks out Seyni who as a clear sight of goal, but the assistants flag is raised.

16' - Another corner-kick for Niger comes to nothing, they have been the better side but still find themselves a goal down.

15' - Niger coming hard at Tunisia as they go in search of the equaliser, Tunisia content to sit back and hit the Menas on the counter for the time being.

10' - Shehu bursts down the left flank before firing in a shot-cum-cross which rattles the side-netting, open start to the game.

5' - GOAL! Tunisia's first attack leads to a goal. Quick counter opens space for Bguir who fires home with a left-footed shot from the edge of the area - keeper should have done better in all honesty.

4' - Successive corner-kicks for Niger, shouts for a penalty, but the referee waves away their claims.

3' - Neat interplay by Niger leads to a corner-kick, Yassine with a timely clearance. Adebayor plays it in, but Jeridi is up to the task.

2' - The North Africans in all red attacking the goal to the right, Niger in white with a splash of orange and green playing from right to left.

1' - Tunisia get the game underway in Kigali