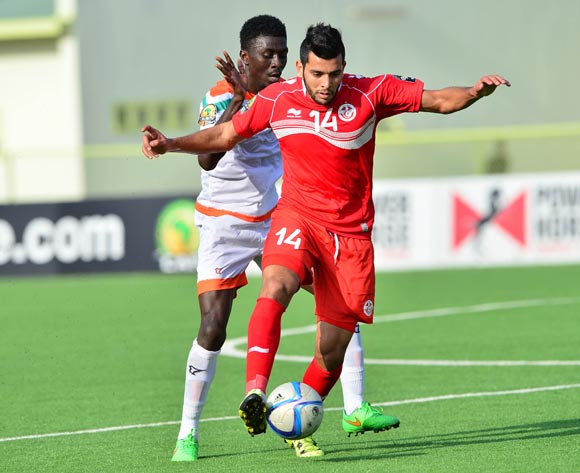 Mohamed Ben Amor of Tunisia gets away from Issa Moussa Mossi Chinois of Niger during the 2016 CHAN football match between Niger and Tunisia at the Stade de Kigali in Kigali, Rwanda on 26 January 2016 ©Gavin Barker/BackpagePix

Tunisia booked their place in the quarterfinals at the 2016 African Nations Championship (CHAN) with a 5-0 win over Niger at the Stade Régional Nyamirambo in Kigali on Tuesday.

The North Africans scored two in the first-half and three in the second to end as Group C winners, leapfrogging both Guinea (who finish as group runners-up) and Nigeria who exit the competition; the Super Eagles lost 1-0 to Syli nationale in Gisenyi.

Chasing nothing but victory, Niger looked dangerous in the opening few minutes of the game - it would be Tunisia though to open the scoring with a quick counter.

Having called up their centre backs for the corner-kick, Niger were found wanting at the back, creating space for Saad Bguir who struck home with a sweet left-footed finish from the edge of the area on five minutes.

Chances continued to come thick and fast at either end of the park with Bguir a constant threat for the Eagles of Carthage; the Espérance attacker seeing his diving shot well saved by Oumarou Ayouba after being put through on goal by Ahmed Akaichi.

Zakari Adebayor and Imarana Seyni linked up well on the half-hour and the latter should've leveled matters, but he failed to hit the target with his header attempt.

Bguir doubled Tunisia's lead six minutes before the break. The attacker with another sharp finish.Captain Maaloul picked out the unmarked attacker who finished with aplomb; firing into the roof of the net.

Things went from bad to worse for 'Menas' who were reduced to 10-men on 74 minutes - Youssouf Oumarou Alio receiving his marching orders following a second bookable offence.

Oumarou's dismissal opened the floodgates with a further three goals to follow in the space of 13 minutes.

Akaichi making it 3-0 after rounding the goalkeeper and sticking the ball in the back of the net on 78 minutes for his fourth goal of the tournament.

Mohamed Ben Amor made it 4-0 with a superb finish - curling the ball into the top left-hand corner from a well worked corner-kick.This before second-half substitute Essifi Hichem put the icing on the cake in stoppage time; slipping the ball under the onrushing Ayouba from a Akaichi through ball.