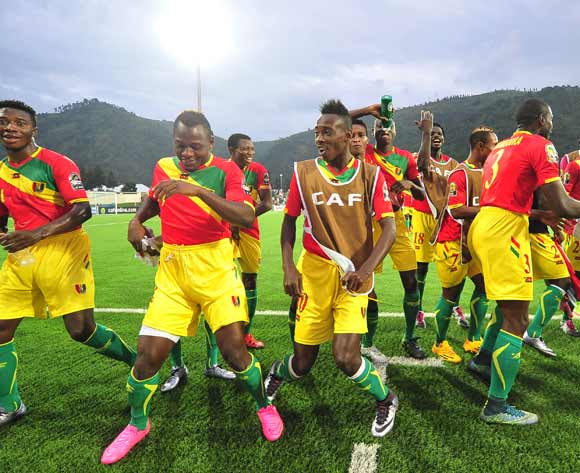 Guinea players celebrate their win over Nigeria after the 2016 CHAN Rwanda game between Guinea and Nigeria at Rubavu Stadium, Rubavu on 26 January 2016 ©Ryan Wilkisky/BackpagePix

Nigeria have been knocked out of the 2016 African Nations Championship (CHAN) following a 1-0 defeat to Guinea in Gisenyi, Rwanda, on Tuesday.

A first defeat for the home-based Super Eagles under Sunday Oliseh couldn't come at a worse time as they fell from first to third in Group C following positives results for both the Syli Nationale and Tunisia who progress as group winners.

AS Horoya 19-year-old midfielder Ibrahima Sankhon scored the only goal of the game; on the cusp of half-time.

NIGERIA CRASH OUT OF CHAN

Over in Kigali, Tunisia ran riot - beating Niger 5-0 to leap to the top of the group standings.

Saad Bguir handed the Eagles of Carthage a 2-0 lead at the break and after Youssouf Oumarou Alio saw read for the 'Menas', Tunisia added three more in the final exchanges to edge Guinea on goal difference (both teams ended on five points after three games).

Man of the match Ahmed Akaichi, Mohamed Ben Amor and Essifi Hichem rounding off a convincing win for the North Africans.

Guinea will face either Zambia or Mali in the next round while Tunisia could come up against one of Zambia, Mali or Uganda who need nothing but victory on Wednesday.