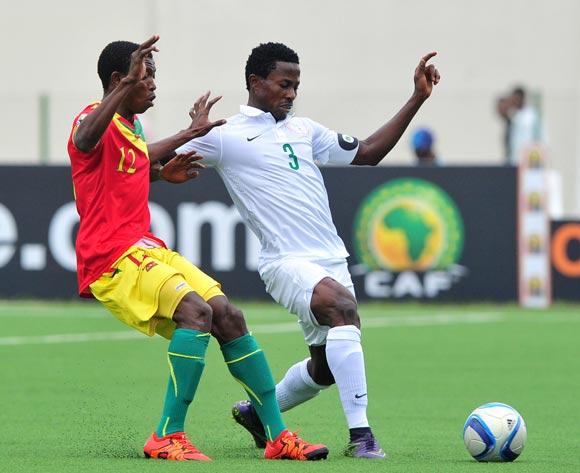 Chima Akas of Nigeria gets to the ball ahead of Aboubacar Sylla of Guinea during the 2016 CHAN Rwanda game between Guinea and Nigeria at Rubavu Stadium, Rubavu on 26 January 2016 ©Ryan Wilkisky/BackpagePix

The Nigeria Football Federation (NFF) have issued a statement apologising for the country’s shock exit from CHAN 2016, saying the target now is qualification to the 2017 AFCON.

Leading the Group C table before kick–off of the final matches on Tuesday, the Super Eagles failed to fly in a 1-0 defeat by Guinea in Rubavu that eliminated Nigeria from tournament in Rwanda.

NFF president Amaju Pinnick reiterated that the African Nations Championship is “both developmental and preparatory for bigger challenges,” and said without mincing words that the federation would now shift focus to the qualification race for the bigger Africa Cup of Nations.

“We apologise to Nigerians for the poor outing of the Super Eagles in Rwanda, but we toe the line of CAF which states that CHAN is a developmental and preparatory competition. Of course, as Nigerians, we love to win always, and we feel bad when we don’t,” he said.

“I want us to take the positives from this tournament. A player like Chisom Chikatara broke onto the global platform and players like Usman Mohammed, Chima Akas, Ikechukwu Ezenwa, Austin Oboroakpo and Ifeanyi Mathew confirmed their class.

“For me, it is disappointing that we did not progress. But the NFF will now focus on the 2017 AFCON qualifiers, and start preparations early for the remaining rounds.”

The Super Eagles have a quick, top-of-the-table double–take against Pharaohs of Egypt in the 2017 Africa Cup of Nations qualifying race, with the first leg in Nigeria on March 23 and the return leg in Egypt five days later.

In June, the Super Eagles take on Chad in N’Djamena before hosting Tanzania in the final round of matches in September.