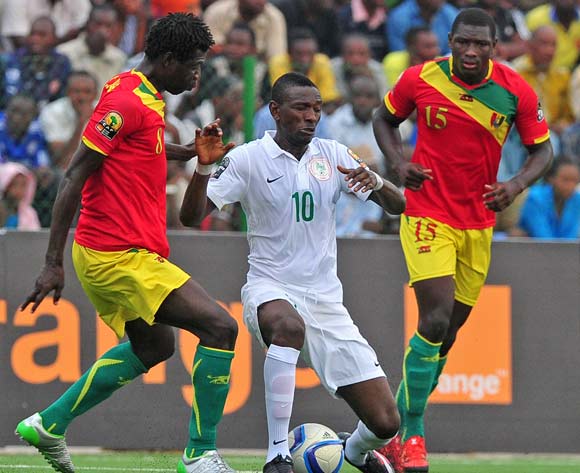 Paul Onobi of Nigeria is fouled by Ibrahima Sory Soumah of Guinea during the 2016 CHAN Rwanda game between Guinea and Nigeria at Rubavu Stadium, Rubavu on 26 January 2016 ©Ryan Wilkisky/BackpagePix

Nigeria’s shock exit from CHAN 2016 has been greeted by disappointment in the football-mad country just as it has sent warning signals concerning qualification for both AFCON 2017 and the 2018 World Cup.

The Nigeria Football Federation (NFF) and coach Sunday Oliseh were quick to apologise for the inglorious crash of the team in Rwanda.

Expectations were high the Super Eagles ‘B’ team could go all the way at this tournament after they finished third two years ago in South Africa even with a team widely agreed was not representative of the best players in the league.

These hopes were well placed as the home-based team were unbeaten until Tuesday’s 1-0 loss to fellow West Africans Guinea.

The team’s preparation was adequate as it included two weeks in close camp in Pretoria, South Africa, where they played two warm-up matches against CHAN qualifiers Cote d’Ivoire and Angola.

Oliseh said his team have worked under very difficult conditions like “a car driving on empty tank”, a reference that bonuses and allowances had yet to be paid.

But such a situation is no longer strange with the country’s teams as the U20s, U17s and U23s all had to endure this cash crunch on their way to clinching the 2015 AYC, the FIFA U17 World Cup and the U23 AFCON crown, respectively.

Did the Eagles get carried away with a 4-1 spanking of whipping boys Niger in their opening group game?

Against Tunisia, Nigeria rode on the luck that the referee cancelled a good goal by the Carthage Eagles just before halftime in a match they were clearly second best.

The Eagles were therefore the happier of the two teams to come away with a draw.

On Tuesday, they were lethargic even after debutants Guinea went ahead went in front just before the interval.

“The boys just couldn’t move, it was like their legs were too heavy for them to carry. They were not motivated,” lamented a disappointed team official.

The CHAN has proved to be a good shop window for players who feature in their various domestic leagues, not only attracting foreign clubs but also staking a serious claim for a place in their countries’ full international squads mostly dominated by overseas-based pros.

These ought to be bigger incentives than cash.

Chisom Chikatara, Usman Mohammed and Ifeanyi Matthew have taken the chance the CHAN in Rwanda has offered to be considered for the main Eagles squad.

But with two months to crucial double-header against Egypt in the AFCON 2017 qualifying series, public confidence in Oliseh has suffered a big body blow.

The results of the two matches in March will most certainly have far more serious implications on the future of the current Super Eagles team.