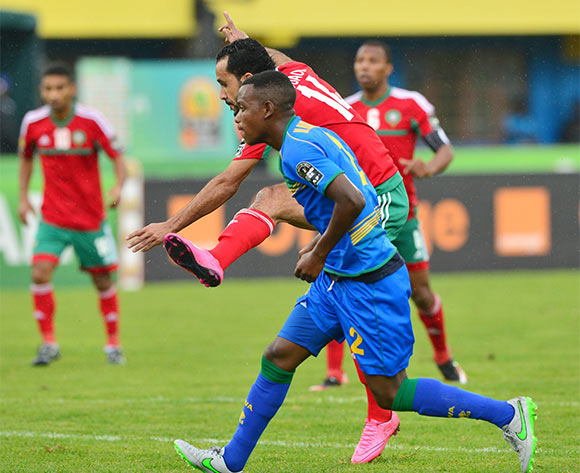 Abdelghani Mouaoui of Morocco scores during the 2016 CHAN football match between Morocco and Rwanda at the Amahoro Stadium in Kigali, Rwanda on 24 January 2016 ©Gavin Barker/BackpagePix

Rwanda’s Amavubi will look to bag a win as they clash against DRC in a 2016 CAF African Championships quarterinal match on Saturday.

The hosts, Rwanda, will hope to keep their good record intact in the tournament as they finished as Group A winners with six points having lost one and won two.

Under the guidance of coach Johnny McKintsry, the Rwandans seem to have turned the corner and are heading in the right direction to becoming a force to be reckoned with in continental football.

They managed to beat Michel Dussuyer’s Cote d’Ivoire and Gabon before losing to Morocco. However, going to the knockout stages, they will hope to get a win over the Leopards.

“This is probably the most difficult opponent we could have faced. DR Congo have started the tournament in scintillating form; and despite our 1-0 win in a pre-CHAN friendly,” said McKinstry.

“It was clear from that game in Rubavu that DRC would be one of the favourites for the tournament from the way they played.

“Like us, they decided to rest a number of players in the final group game, making nine changes to their regular team.

“I am sure it will be an excellent game for the spectators; and potentially the ’Game of the Tournament’ with two teams giving everything possible, not only for a place in the semifinals; but also to ensure local bragging rights in the region.”

On the other hand, the Leopards will also want to bag a win and progress to the next stage of the tournament.

Florent Ibenge’s men are motivated as they finished as number two in Group B behind the Indomitable Lions of Cameroon.

They registered two wins over Angola and Ethiopia before losing 3-1 to Cameroon in their final group stage encounter.

“I really have bad feelings. The defence played badly. They failed to stop the Cameroonians, and the midfielders and strikers as well didn’t play good,” said Ibenge.

“We have no problem with opponents at the next round. We fear no team. At the last edition in South Africa, we were eliminated at the quarterfinals stage. We are not scared of Rwanda.

“Football is all about the fans and we will do it. We are always committed, playing against a host or any other opponent.”

The match is set to get underway at Amahoro Stadium, Kigali on Saturday afternoon, kicking-off at 15:00.