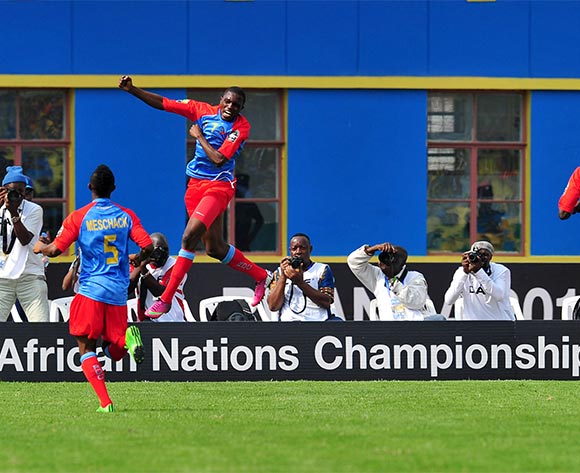 Welcome to our live coverage of the 2016 African Nations Championship (CHAN) from Rwanda.

We are into the knockout stages of the competition with hosts Rwanda taking on the Democratic Republic of Congo at a packed Amahoro Stadium in the Capital, Kigali.

An extra-time goal from Padou Bompunga  secured a 2-1 win for The Leopards who will next face either Zambia or Guinea for a place in the final.

113' - CHANCE DRC! Free-kick whipped into a dangerous area, somehow the ball evades everyone!

106' - Second-half in extra-time has kicked-off, can someone find the winning goal or will the game be decided from 12 yards.

101' - Brave defending by Rwanda to deny Mombo, not once but twice! Bodies on the ground, giving everything.

98' - Luvumbu coming to life in extra-time, see's his snap shot wide of goal!

95' - CHANCE for Sugira who fires at goal on the half-volley, balls flies narrowly wide!

90+3' - Full-Time: Rwanda 1-1 DRC - Scores deadlocked at the end of regulation time and extra-time will follow.

89' - Fierce effort by Bayisenge from a free-kick, well saved by Matampi! Nervous times for both sets of supporters.

87' - Free-kick DRC - Luvumbu goes for goal and is denied by the goalkeeper who makes a good save.

78' - Bayisenge tries his luck from range, his free-kick attempt had a lot of power, but lacked accuracy.

72' - CHANCE AFTER CHANCE! At the other end Luvumbu flashes a shot narrowly wide of goal.

71' - SO CLOSE! Sugira shakes off his marker but is unable to find the back of the net with his chip effort!

69' - Ball takes a deflection and is easily gathered by the Rwanda stopper. That could've gone anywhere, but luck was on the Amavubi's side on that occasion.

68' - Dangerous free-kick awarded to the DRC on the edge of the area following a foul on Luvumbu. He dusts himself off and is ready to take it...

63' - At the other end Luvumbu hits the target from range. Great tempo to the game at the moment.

61' - Rwanda have found another gear. Ball played short to Bayisenge from a corner-kick, he lets fly! Ball always going over.

57' - GOAL GOAL GOAL GOAL! Delirium inside the Amahoro Stadium...Sugira who else! The striker with a top class finish having been put through on goal by Iranzi.

54' - CLOSE! Rwanda win back to back corner-kicks and almost find the equaliser through Rwatubyaye; the defender fails to hit the target with his leaping header. Rwanda ramping up the pressure.

53' - Crowd on the feet, but the corner-kick lacks accuracy; easy take for Matampi.

52' - CHANCE! Luvumbu in a pocket of space on the edge of the area, but he completely miss kicks his effort, Rwanda break and win a corner-kick.

50' - No goal mouth action to report on just yet in the second stanza. DRC will be happy if things remain this way for the remainder of the game.

46' - Rwanda sub: Savio Nshuti replaces Habyarimana at the start of the second-half.

45+1' - Yellow card Iranzi - very lucky to get away with just a yellow following a double stamp on Bolingi; could easily have received his marching orders.

40' - Into the final five minutes, DRC dominated most of the half, but Rwanda have started to find their rhythm and should be level.

37' - CHANCE! SAVE! Habyarimana should have scored! DRC fail to clear their lines, ball falls to Habyarimana who draws a top class save out of Matampi from close range.

36' - Quick-fire chances for Bolingi and Luvumbu who sends his free-kick attempt from 35 yards over the crossbar. DRC still bossing proceedings.

29' - Free-kick DRC in a dangerous position comes to nothing. The Leopards have been the better side as we approach the half-hour mark.

25' - Good positive play by The Amavubi - just lacking with the final product at the moment, Matampi still untested in the DRC goal.

20' - POST! Ball bounces into Bolingi's path, the striker with an instinctive shot, beats the keeper but not the post! So close to a second.

13' - Perfect start for the DRC who have superior in the opening exchanges, Rwanda need to settle and settle fast.

11' - GOAL GOAL GOAL! What a strike, absolute rocket. Gikanji picks up the ball from about 30 yards and fires an unstoppable shot past the Rwanda stopper who is rooted to his spot, DRC take the lead.

8' - Luvumbu lets fly from range, shot sails well wide; drawing boos from the home supporters.  He is one to watch.

5' - Successive free-kicks for Rwanda come to nothing as the crowd start to find their voice. Absolutely packed inside the Amahoro Stadium; mostly Rwanda supporters but also a fair share from the DRC - a reported 3000 fans have slipped over the border to watch this match.

3' - Opening three minutes have belonged to DRC with Elia forcing Eric Ndayishimiye into a save.

2' - Rwanda in yellow and blue attacking the goal to the right in the first-half, DRC in blue and red playing from right to left.

1' - DRC win a corner-kick straight from the kick-off; well defended by Rwanda who clear their lines.

- Both coaches have named full strength starting elevens having both rested several players for their final group encounter.

- Hot day in Kigali. Tickets have been sold out!