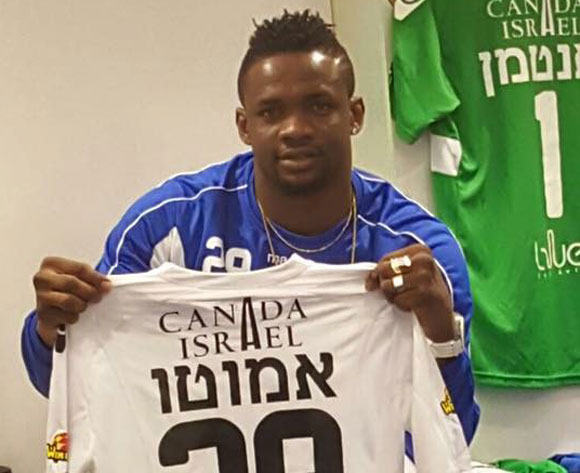 Amutu - From Malaysia to Israel

Several Nigerian players were linked to moves in Europe during the just-ended winter transfer window with Eagles captain Ahmed Musa almost making a move to EPL leaders Leicester City, who had several bids turned down by CSKA Moscow.

Osaze Odemwingie was also on the verge of returning to France with Olympique Marseille, but Stoke City called off the move.

Emmanuel Emenike: Ex-international Emmanuel Emenike has actualised his dream of EPL switch when he joined West Ham United on loan from Fenerbahce till the end of the season with an option of outright buy. Emenike is a powerful and fast striker who is well equipped to excel in the EPL. He played for Al Ain of UAE on loan at the start of the season.

Victor Osimhen: Nigeria youth international sealed a deal which will see him play for German Bundesliga side Wolfsburg from January 1,2017, when he would have clocked 18. Osimhen, who is the all-time top scorer in history of FIFA U17 World Cup with 10 goals at Chile 2015, is training with the team. The Ultimate Strikers player was linked with moves to EPL teams.

Kalu Uche: The 33-year-old striker returned to Spain to join his former club Almeria, who are now battling to stay afloat in the second division after they were relegated from La Liga last season. The former Levante striker joined Almeria from the Indian Super League. He is expected to help the team survive the drop.

Izunna Uzochukwu: He signed a three and a half year deal with OB Odense from Amkar Perm. He quit the Russian team due to unpaid wages and has hit the ground running at the Danish club with a goal on his debut.

Moses Simon: The striker has extended his contract with Belgian club Genk. He will now stay at the club till 2019.

Abiola Dauda: The striker sealed a loan deal to Scottish club Hearts till the end of the season from Dutch side Vitesse Arnhem. The striker lost his place in the team to Chelsea forward Dominic Solanke, who is on loan at the club.

Shuaibu Ibrahim: Jos-born striker has joined Norwegian club Haugesund on a three-year deal. The GBS Academy of Jos product played for Giwa FC and Wikki Tourists in Nigeria. He impressed at the Norwegian team's training camp after he fired a hat-trick in a test game.

Promise Isaac: The former Nigeria U20 captain joined Karabukspur in Turkish second division. The former Genclirbilirgi striker signed a year and a half deal. He has joined countryman Simon Zenke.

Ike Uche: The chief has he is called have returned to familiar terrain Spain to join Malaga on loan till the end of the season from Mexican club Tigres. Uche has struggled to stay fit since his celebrated move to Tigres.

Uche Kalu: He returned to Turkey to join is former team Adanaspor after his sojourn in Kazakhstan, where he last played for Tobol.

Usman Saleh: The former U20 striker has signed a contract that will keep him at Viking FK till December 2019. He featured for Wikki Tourists in the Nigeria Professional Football League before he headed to Europe.

Aniekpeno Udoh: The Akwa United striker has joined Viking in Norway after he netted nine goals in the Nigeria league last season to help his hometown to stay up.

Chisom Chikatara:  CHAN 2016 revelation has joined Wydad Casablanca in Morocco after his goals in Rwanda sparked off a flurry of interests from across the world.

Abduljaleel Ajagun: The midfielder has become surplus to requirements at top Greek club Panathiniakos, who have shipped him out on loan to APO Levadiakos till the end of the season.

Alhaji Gero: The former Enugu Rangers striker has quit Danish club Viborg to return to Sweden with Ostersunds. He has signed a three-year deal.

Austin Amutu: The highly-rated striker has joined Israeli club Hapoel Ironi Kriyat Shmona after a stint in Malaysia. He is already firing in Israel and many big things are expected of him sooner rather than later.