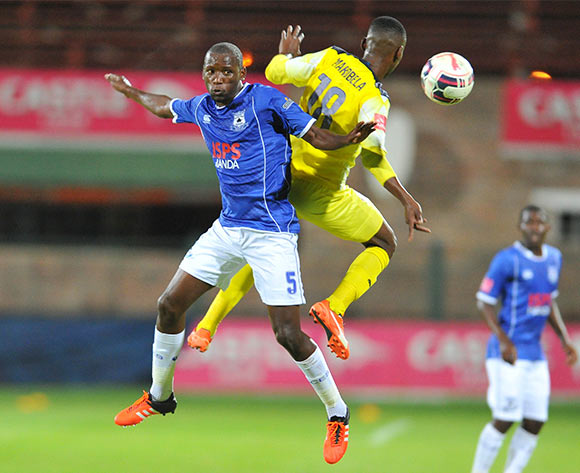 Thanduyise Khuboni of Black Aces challenged by Tebogo Makobela of Jomo Cosmos during the Absa Premiership match between Jomo Cosmos and Black Aces at the Olen Park Stadium in Pochestroom, South Africa on February 02, 2016 ©Samuel Shivambu/BackpagePix

Black Aces will target an Absa Premiership victory when they host Bloemfontein Celtic at Mbombela Stadium on 6 February 2016, kick-off at 15h30.

Aces recorded their fourth draw of the season when they were held 0-0 at Jomo Cosmos on February 2.

The Mpumalanga side has claimed 20 points from eight home matches this season.

AmaZayoni are placed second on the Absa Premiership log with 34 points from 17 matches.

Celtic recorded their sixth draw of the season when they were held 1-1 at home by SuperSport United on February 3.

The Bloemfontein side has claimed 10 points from nine away matches this season.

Phunya Sele Sele are placed eighth on the Absa Premiership log with 21 points from 17 matches.

In head-to-head stats, Celtic and Aces have met in 33 league matches since 1985.

Phunya Sele Sele have 13 wins compared to 10 for AmaZayoni, while 10 matches have been drawn.

Aces have won six of their 16 home matches against Celtic, suffering six defeats in the process.

When the teams met earlier this season, AmaZayoni claimed a 2-0 away win in Bloemfontein.

The victory was Aces’ first against Celtic in the top flight since 1995.