Oliseh on collision course with NFF over Babangida sack 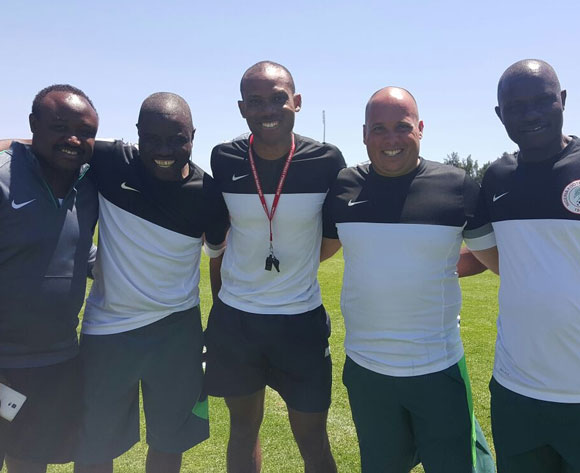 Eagles coach Oliseh (middle) flanked by his assistants including Babangida

Nigeria coach Sunday Oliseh is set for another slug-out with the Nigeria Football Federation (NFF) after he insisted Tijjani Babangida remains his personal assistant and has not been sacked.

This week, the NFF have issued a final warning to Oliseh to keep his cool after his recent “YouTube rantings”.

However, top sources have now disclosed the Super Eagles coach has put his foot down that his employers do not have a say on the two persons he could employ – an assistant coach and a personal assistant – as contained in the contract he signed.

“Oliseh has asked questions on the reported dismissal of his personal assistant as no reason was given for their decision,” a source informed.

“He has insisted Babangida remains his personal assistant as long as he has a contract with the NFF.”

Another source said: "Oliseh is the real target, but like cowards they are now after the soft targets around him like Babangida."

The NFF agreed to pay the former international winger 600,000 Naira a month when they engaged Oliseh in July 2015.

However, he has yet to receive a kobo since then, not even when all their coaches were paid a month’s pay in December.