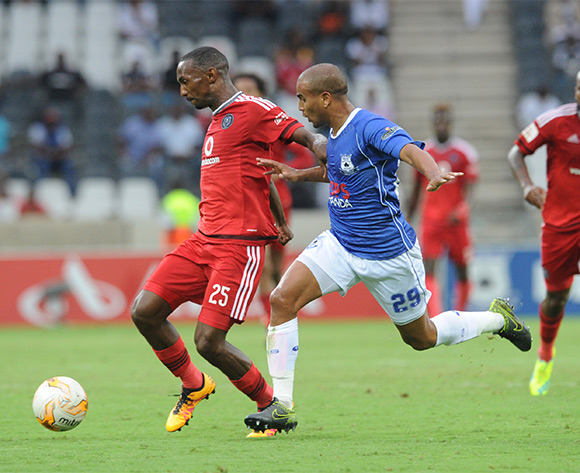 Pirates took an early lead in the 4th minute when Thabo Rakhale opened buried a first time volleyed effort after he got onto the end of Thabo Matlaba’s perfect cross from the right wing.

But Aces fought back quickly and found the net themselves through in-form hitman Collins Mbesuma. He only need one chance to rifle home a low shot with his left foot past Brighton Mhlongo on his near post. This, after good work by Bryce Moon on the right wing to pull back a cross to Mbesuma.

Mpho Makola came close to scoring a second for Bucs in the 22nd minute when his curling free kick struck the crossbar with the goalkeeper well beaten. And in the 27th minute, Gift Motupa saw his pile driver just miss the top corner of goal.

Pirates then had two good chances to score. First, in the 33rd minute, Rakhale found Issa Sarr with a chipped pass in behind the defence, but the Senegalese midfielder got his volley attempt all wrong. A minute later Lehlohonolo Majoro found himself in a good position to shoot, but for some reason took a touch instead of firing first time and the chance was wssted.

Just before the half time break Bucs got another good chance after cutting open the Aces defence once again. But Gift Motupa could not get his shot on target from the right side of the danger area, despite having time to pick his spot.

Makola had the first chance of the second half but he got his attempted shot totally wrong with his left foot. He was later taken off and replaced by Tendai Ndoro who made an immediate impact.

Ndoro cut in from the left flank and drove in a pass towards Motupa, but he missed the ball in trying to help it towards goal and instead the ball rolled into the far post and beat Walters in goal.

Then substitute Menzi Masuku ran into space and saw his effort blocked by an Aces defender as Pirates pushed for a third goal in the final five minutes of the regulation 90.

But Pirates were not done yet and Ndoro found his second. After receiving a pass and turning onto his right foot, the Zimbabwean struck a right footed shot into the far bottom corner of goal.

Ndoro could have had a hat trick in the 90th minute, but his left footed shot went wide of goal.