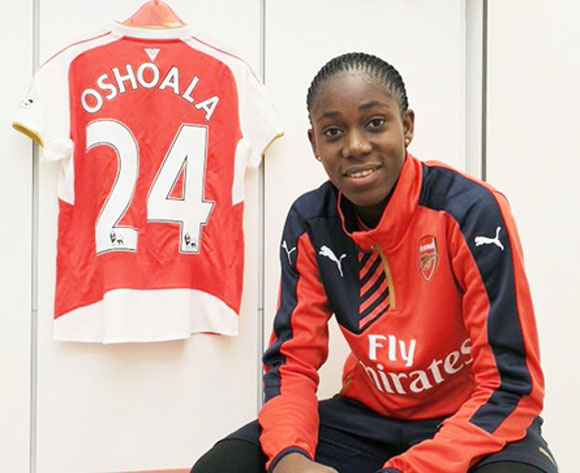 Oshoala scored for Arsenal Ladies on her league debut

Nigeria international Asisat Oshoala has moved a step closer to reaching superstardom in the women’s game after she completed her transfer to Arsenal Ladies from Liverpool Ladies.

Patience Avre, Mercy Akide-Udoh and Perpetua Nkwocha have over the years been the standard bearers for Nigerian women’s football, but Oshoala is destined to eclipse all their accomplishments before long.

The Ikorodu-born forward is headed for greatness with Arsenal going by her pedigree and the quality of players she will now play alongside.

She could call on the experience of 36-year-old forward Kelly Smith and the Spanish star Natalia Pablos, who netted seven goals last year.

Oshoala is primed to win more laurels with the London club after making an impact at Liverpool Ladies, where she scored three goals in nine appearances last year even after she was slowed down by a long-term injury.

She must have left a big impression on Arsenal last year when she scored against them for Liverpool to run away 3-1 winners in a league game in July.

The athletic player, who could also play in defence and midfield, is already an achiever having represented Nigeria at youth and full international levels. She won African Women’s Nations Cup in 2014 and a silver medal at FIFA U20 World same year.

Arsenal coach Pedro Losa has said he is delighted to sign the Highly-rated 21-year-old striker.

“Asisat is a fantastic talent and will be a great addition to our squad. She is quick, with excellent feet and has proven she can score goals, so it’s very positive she has decided to join us,” he remarked.

Arsenal Ladies kick off their season against Birmingham Ladies in the Women’s FA Cup on Sunday, and Oshoala will be looking to hit the ground running.

“I can’t wait for the start of the season to happen,” she said. “I’m really eager for that - I just want to show what we have to the fans,” she said.

And on Wednesday, Arsenal will get this year’s league campaign off and running when they play host to Reading.