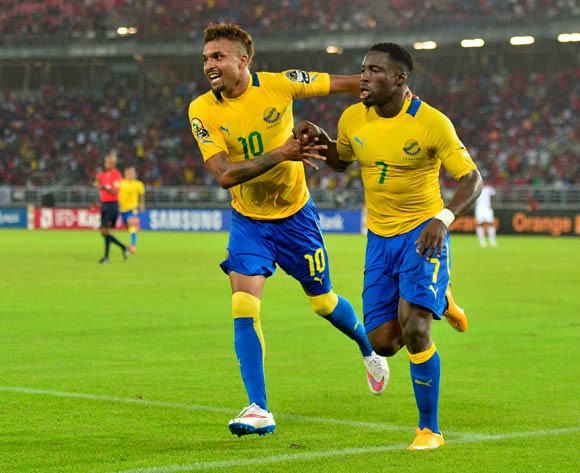 Frederic Bulot of Gabon (L) and Malick Evouna of Gabon (R) celebrate after Evouna during the 2015 Africa Cup of Nations football match between Burkina Faso v Gabon at Bata Stadium in Bata, Equatorial Guinea on 17 January 2015

Sierra Leone will be out to silence Gabon when they host them in an international friendly at the National Stadium in Freetown on Monday.

The Lone Stars are coming off a 2-1 defeat to Gabon's Panthers in a friendly at the Stade de Franceville in Franceville on Friday. Sheka Fofanah netted for the visitors.

The West African side are placed third on their 2017 Africa Cup of Nations (AFCON) qualification group with a point from two matches.

Having narrowly lost 1-0 to Sudan away, Sierra Leone managed to hold reigning African champions Ivory Coast to a goalless draw in their Group I games.

The Leone Stars' next Group I game is against Sudan at home in June, 2016. For now, though, Sellas Tetteh's men are focusing on beating Gabon in another friendly on Monday.

Ghanaian coach Tetteh had named 12 foreign-based players and nine home-based players in his squad for the two matches against the Panthers.

Meanwhile, Gabon will hoping to emerge victorious once again when they lock horns with Sierra Leone on Monday afternoon.

The Panthers took the lead through Pierre-Emerick Aubameyang against the Leone Stars on Friday, while Malick Evouna netted the other goal for the home side.

As the 2017 finals hosts, Gabon, were also drawn into Group I and they play games against the other three teams in the group.

But these matches are only considered as friendlies and not counted for Group I standings. Gabon remain undefeated in these friendlies.

Portuguese coach Costa will once again look to Germany-based striker Aubameyang to fire Gabon past Sierra Leone on Monday.

Referee Daouda Gueye from Senegal will be in charge of the encounter between the Sierra Leone's Leone Stars and the Panthers of Gabon.