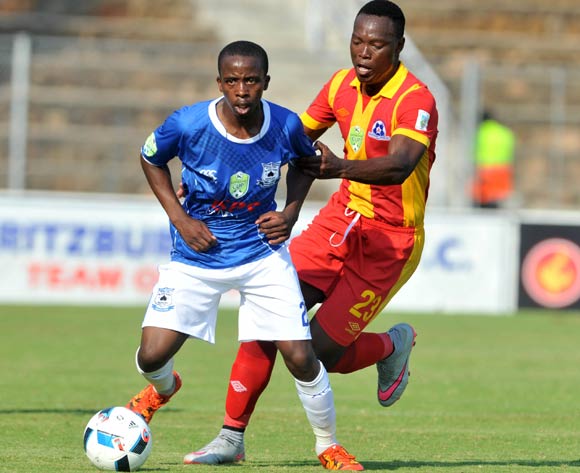 A first half penalty by Collins Mbesuma and a late strike by Limbikani Mzava were enough to ensure Mpumalanga Black Aces are through to the last eight of the Nedbank Cup when they defeated Maritzburg United 2-0 at Kanyamazane Stadium on Saturday afternoon.

The win means AmaZayoni join Bidvest Wits in the quarterfinals of the Ke Yona competition, after they defeated Magesi FC 6-0 on Friday night.

Despite a slow start, Aces threatened first, but they failed to clinch an opening goal when Tumelo Mogapi denied Sibusiso Masina after a telling cross by Aubrey Ngoma on the left.

After a great move by the hosts, they were awarded a penalty in the 19th minute when David Booysen fouled Bhongolethu Jayiya in the box and the referee pointed to the spot.

The experienced Zambian striker and skipper Mbesuma converted from the spot, beating goalkeeper Tawfeeq Salie as they grabbed a 1-0 lead.

However, three minutes later, Kurt Lentjies had a chance to respond and make it 1-1, but his well-drilled set piece was tipped away by Shu-Aib Walters for a corner.

With two minutes to the interval, Ryan Moon got a chance to head home after a cross by Thamsanqa Teyise, but his header was not well controlled and failed to trouble Walters.

In the second half, Mbesuma came close to making it 2-0 when he failed to connect with a cross down the right flank from Vincent Kobola.

Just after coming on, Gregory Maasdorp nearly made an immediate impact after he missed a wonderful opportunity, beating Walters off his line with a great header, however, it went inches over the crossbar in the 63rd minute.

With 15 minutes to go, good touches in the middle of the park by Ernst Middendorp's men allowed them to penetrate Aces, but Philani Zulu's shot couldn't beat the shining Walters.

Substitute Judas Moseamedi became a handful for the visitors' defence and kept United on their toes but failed to make it 2-0 for Ertugral's men as his attempt was blocked from close range.

Exactly in the 90th minute, United keeper Salie was beaten on the near post by defender Mzava after a brilliant low set piece by the Malawian skipper, ensuring AmaZayoni are through to the next round.