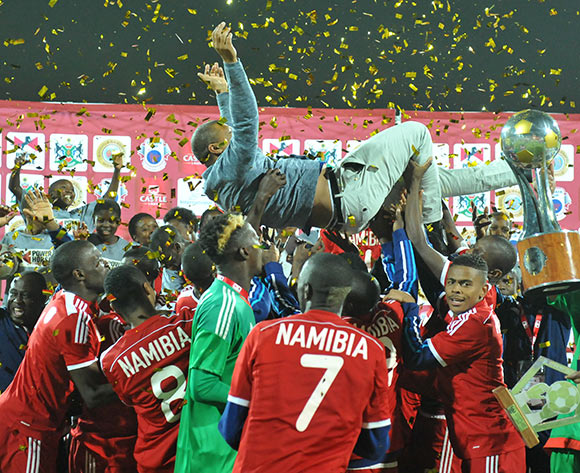 Ricardo Manetti, coach of Namibia celebrates his players during 2015 Cosafa Cup Final match between Namibia and Mozambique at Moruleng Stadium, Rustenburg on the 30 May 2015 ©Muzi Ntombela/BackpagePix

Namibia are working round the clock to ensure everything is smooth for the upcoming 2016 COSAFA Castle Cup to be held in Windhoek in June.

The Brave Warriors are the defending champions having claimed the trophy in Rustenburg, South Africa last year and will now stage this year's edition at home.

The South West African nation is now preparing to host the draw in Windhoek for the June regional tournament on 25 April.

Speaking to the Namibian Football Association's website, chairman of the LOC Roger Kambatuku said they are busy with all the work.

“We are very busy with all the work that needs to be done in time for the opening of the tournament on 11 June and our first event is the final draw to be conducted on April 25 here in Windhoek and before that there are lot to do for the realization of the tournament,” Kambatuku said.

Eight national teams will be in the bowl for the draw to go into two Groups after which the group winners will join the defending champions Namibia, South Africa, Zambia, Malawi, Botswana, Mozambique in the quarter-finals.

The tournament is set to be staged from 11-25 June in Windhoek and the group matches will be played at Sam Nujoma and Independence Stadiums.