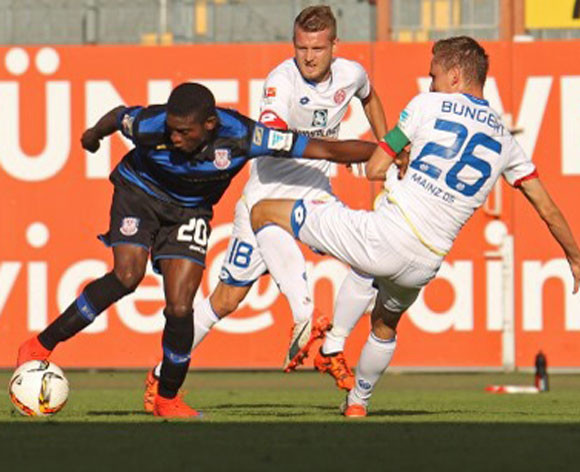 Awoniyi in action for FSV Frankfurt

Awoniyi, who is on loan till the end of the season from Liverpool,  said he is not pleased that  FSV Frankfurt are lying precariously on the lower end of the table as the German second tier league nearing its conclusion.

"We are presently 15th on the table and we need at least two more wins to move away from the relegation zone," hinted lad that has featured for all age-grade Nigeria national teams.

Former Golden Eaglets striker Awoniyi said he is confident he will grab when FSV Frankfurt visit Sandhausen today in the competitive 2.Bundesliga.

"We need to work extra hard to claim the maximum points against Sandhausen and I have this great feeling of scoring at least a goal with the grace of God."

Awoniyi  only scored his first goal in the colours of FSV Frankfurt  after a difficult start  last month against Heidenheim and he sounded optimistic ahead of  today’s away trip to  Sandhausen.

"It's been over a month when I scored my first goal for FSV Frankfurt and I'm working hard to score more," noted the 18-year-old forward.

"I'm  happy with my form because I have been playing regularly since the start of the second phase but I wish I can score more goals."