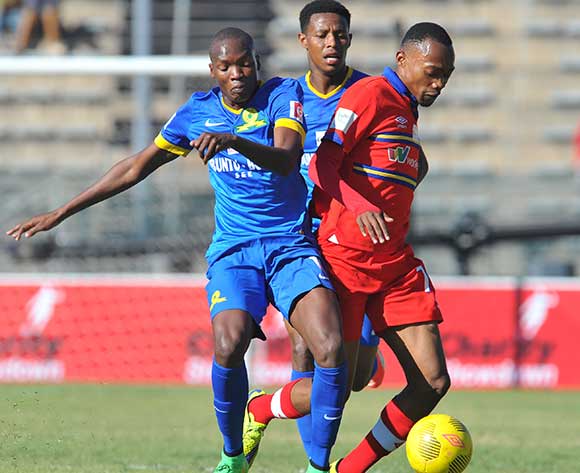 Thabo Mnyamane of University Pretoria challenged by Mogakolodi Ngele and Bongani Zungu of Mamelodi Sundowns during the 2015 Charity Showdown match between Mamelodi Sundowns and University of Pretoria at the Lucas Moripe Stadium in Pretoria, South Africa on July 19, 2015 ©Samuel Shivambu/BackpagePix

University of Pretoria will be fighting for their Absa Premiership survival when they host local rivals Mamelodi Sundowns at Tuks Stadium on 4 May 2016, kick-off at 19h30.

Tuks suffered a second successive league loss when they were beaten 1-0 at fellow relegation candidates Jomo Cosmos on May 1.

The University-based side has claimed 13 points from as many home matches this season.

AmaTuks are placed 15th on the Absa Premiership log with 21 points from 27 matches.

Sundowns claimed their 19th league win of the season and stretched their lead at the top of the log to six points with a 3-1 home win over Kaizer Chiefs on April 30.

The Tshwane side has claimed 27 points from 13 away matches this season.

The Brazilians are placed first on the Absa Premiership log with 62 points from 27 matches.

In head-to-head stats, Sundowns and Tuks have met in seven league matches since 2012/13.

The Brazilians boast an unbeaten record in the sequence, with four wins and three draws.

Tuks have recorded two draws and one defeat in their three turns as league hosts against ‘Downs.

When the teams met earlier this season, the Brazilians claimed a 2-1 home victory.