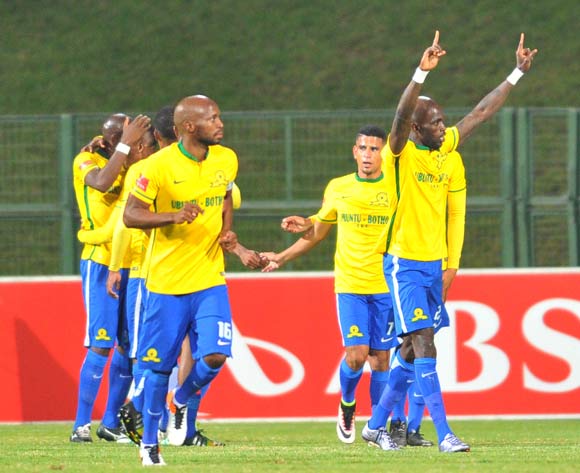 Anthony Laffor of Mamelodi Sundowns celebrates his goal with his teammates during the Absa Premiership match between University of Pretoria and Mamelodi Sundowns at the Tuks Stadium in Pretoria, South Africa on May 04, 2016 ©Samuel Shivambu/BackpagePix

Mamelodi Sundowns have been crowned Absa Premiership champions for a record extending seventh time following a 3-0 win over the University of Pretoria at Tuks Stadium on Wednesday.

The Brazilians condemning AmaTuks to further misery with their Tshwane rivals in serious danger of relegation with two games remaining.

With Billionaire-owner Patrice Motsepe watching on from the stands, Anthony Laffor made sure to settle any early nerves - hitting the back of the net on two occasions in the opening exchanges before completing his hat-trick in the second half.

Laffor pounced on an early mistake against a AmaTuks side fighting their own battles. The home side failed to clear from danger, allowing Laffor time to sweep home on three minutes.

The former SuperSport United winger made it 2-0 with 20 minutes on the clock, rounding off a superb run by player of the season contender Khama Billiat.

Billiat and Laffor teamed up for Laffor's third in the 59th minute. The Liberia international with a cool finish after being put through on goal by his Sundowns teammate.

The Brazilians saw out the rest of the game with relative ease as they reclaimed the title they lost to Kaizer Chiefs last season.

Defeat for AmaTuks leaves them with a mountain to climb as they aim to avoid relegation back to the National First Division. Shaun Bartlett's side trail Jomo Cosmos by four points following their 2-2 draw at Ajax Cape Town.