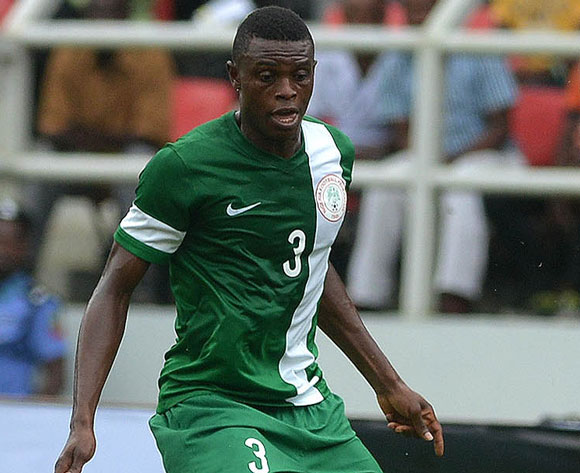 Nigeria U23 defender Stanley Amuzie was the match winner

Coach Samson Siasia is expected to release the list of players for next month’s Suwon Invitational Tournament in South Korea on Friday.

READ: U23s off to Korea Monday

This followed the arrival of seven overseas-based players to the team’s training camp.

First to arrive the Serob Legacy Hotel Abuja camp of the Dream Team was captain Azubuike Okechukwu who was looking fit and ready as he wasted no time in joining the team's morning training session.

Next was Portugal-based defender Stanley Amuzie, who came in around 2pm thereby being part of the team's evening training session, and the number was increased when the team was having dinner with the arrival of the trio of Godwin Saviour, Taiwo Awoniyi and Usman Mohammed, with back slapping and hugging from their team mates and officials.

On Thursday afternoon, the camp was further boosted when England based Nathan Oduwa arrived.

Captain Okechukwu expressed delight in being called upon to wear the colors of the country as he sees it as a thing of pride and honour.

"This is a big family and any time I am called upon to be part of the family, I feel highly honoured and as such will do everything to make it,” he said.

“I have had a hectic season and as such had wanted to rest a little with my family, but this is a call to duty which I must honour, so I had to cut short my rest to beat the deadline set by my coach who I know is a no –nonsense person."

With the arrival of the six players, the camp now has seven of the eight foreign-based players invited to camp, with France-based midfielder Sodiq Popoola expected in camp on Friday due to flight challenges.