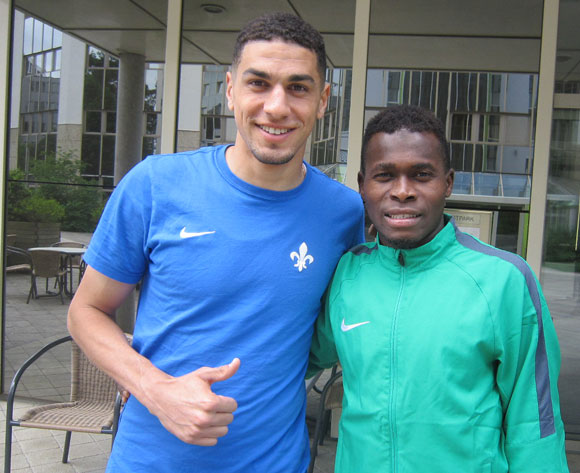 AfricanFootball.com has specially gathered Germany-based defender Leon Balogun will start from the bench in Tuesday’s friendly against hosts Luxembourg after three major blunders in the heart of the defence, which a more ruthless team than Mali would have punished.

The Mainz 05 ace paired Norway-based William Troost-Ekong in the heart of the Eagles back four against Mali on Friday, but his mistakes are likely to see lose his place to either Chelsea defender Kenneth Omeruo or Turkey-based Gbenga Arokoyo for the next game in Luxembourg City.

“The coaches have noted Balogun’s mistakes and will now consider either Omeruo or Arokoyo to pair Troost-Ekong against Luxembourg,” a top source who is in France with the Eagles informed AfricanFootball.com

Omeruo has been held back by a visa hitch and only had his first training with the rest of the squad Saturday evening.

The 27-year-old Balogun made 21 appearances in the Bundesliga last season and scored a goal as Mainz finished an impressive sixth on the table.

Samm Audu is up to being no good again - trying to peddle his player (Omeruo) at the expense of bringing down another (Leon Balogun). This is the same Balogun who I saw play well for the full 90 he was on, and who several media outlets rated high in their player ratings for this game. Audu, if you simply said that he (Balogun) will likely be rested for the game due to other defenders being in camp, that would have been a more credible sell. Unfortunately, the way you wrote this story makes you come across as disingenuous and points to you being on the take! Clean up your act, bro!!!!

Please whosoever is trying to create bad blood in the team should keep shut. Friendlies are for correcting mistakes. So Mr man a player who played for a top team in bundesliga regularly through out the season does not know how to play again and inspire of his several mistakes he played full match and yet Mali failed to score? Abeg Mr INFORMANT' get busy and do the job you are paid for.