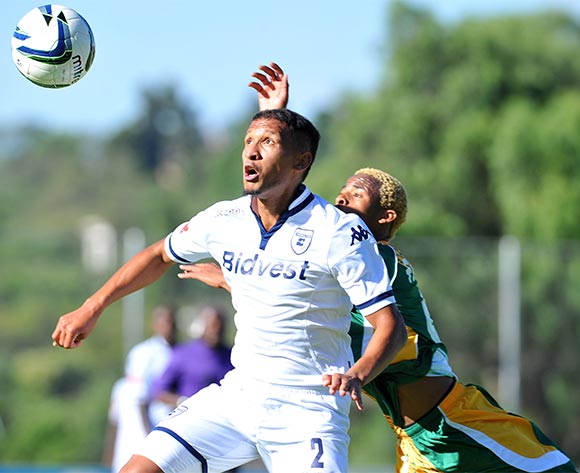 Nazeer Allie of Bidvest Wits challenged by Andile Fikizolo of Golden Arrows during the Absa Premiership match between Bidvest Wits and Golden Arrows at the Bidvest Stadium in Johannesburg, South Africa on November 21, 2015 ©Samuel Shivambu/BackpagePix

Bidvest Wits defender Nazeer Allie has admitted that his side lacked the consistency to challenge Mamelodi Sundowns for the Absa Premiership title in the recently completed 2015/16 season.

The Johannesburg team finished the season in second place, but they were a full 14 points off the pace of the Brazilians.

Allie recently won The Coach’s Award at Wits’ awards dinner and explained that the University-based side simply didn’t have Sundowns’ relentless consistency.

“It is an honour for me to receive an award, but like Tyson [Thulani Hlatshwayo] said we just simply were not consistent enough, where Sundowns were,” Allie told his club’s official website.

“Of course they deserved to win the league and congratulations to them for winning it.”

The Clever Boys drew six of their 30 matches over the campaign, something which hurt their title chances according to Allie.

“The games we drew most definitely counted against us,” he said. “As players we would like to rectify that in the new season.”

Allie also explained that he was satisfied with his first season in Johannesburg, having moved to Gauteng last year after a decade in the PSL with Ajax Cape Town.

“Coming from Cape Town I had to be strong, Cape Town is just about Cape Town,” he said.

“When you leave you realise there is much more to the footballing world than just the Mother City.

“It was a tough move but I have settled well. I have some friends in the squad like Tyson, Daine [Klate] and Moeneeb [Josephs] to name a few.

“I am grateful for the opportunity of moving to Joburg, and while I will enjoy my break, I’m looking forward to what the new season will bring.”