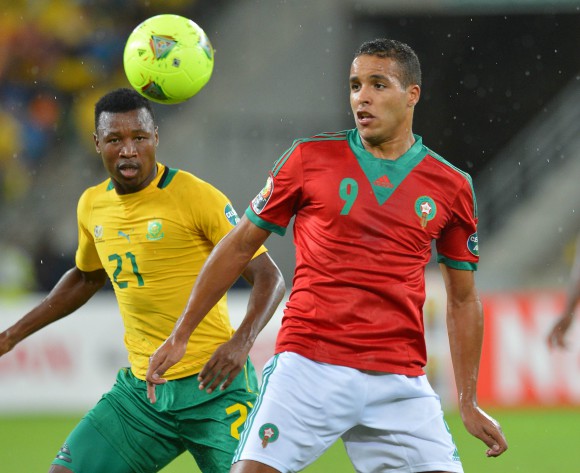 Libya will be out to stun Morocco when they host them in the 2017 Africa Cup of Nations (AFCON) qualifier at the Stade Olympique de Radès in Tunisia on Friday.

The Mediterranean Knights play their (AFCON) Group F qualifier home games in Egypt and Tunisia due to the civil war in their home country.

They hammered São Tomé and Príncipe 4-0 in their previous Group F encounter at the Desert Petro Sport Stadium in Egypt.

Mohamed Zubya hit the back of the net three times for home side, while Mohamed El Monir also grabbed a late goal for Libya.

The Mediterranean Knights are placed-third on the Group F standings. They are three points behind second-placed Cape Verde.

Experienced coach Javier Clemente, who is the Libya head coach, will once again look to his key players Hamdo Al Masri and Zubya.

Meanwhile, Morocco will be hoping to maintain their winning run in the 2017 AFCON qualifying group when they clash with Libya on Friday.

The Atlas Lions brushed aside Cape Verde 2-0 in their previous Group F encounter at the Stade de Marrakech in Marrakesh.

Youssef El-Arabi hit the back of the net from the spot-kick ten minutes after the restart, before grabbing his brace on the hour mark.

Morocco, who have already qualified for the 2017 AFCON finals in Gabon, are sitting at the top of Group F standings. They are six points ahead of second-placed Cape Verde.

Tunisian referee Youssef Essrayri will be in charge of the Group F encounter between Libya and Morocco.