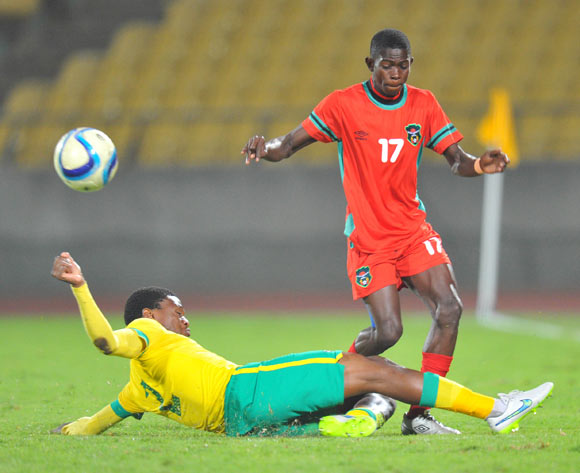 Micium Mhone of Malawi tackled by Motjeka Madisha of South Africa during the 2015 Cosafa Cup Plate Semi Finals match between South Africa and Malawi at Royal Bafokeng Stadium, Rustenburg on the 27 May 2015

Malawi national team coach Ernest Mtawali has come under fire once again for his decision making.

According to the Nyasa Times, Mtawali has released South African-based midfielder Micium Mhone from the 2016 COSAFA Castle Cup camp.

It is announced that the National First Division-bound Mhone has now returned home after their 3-0 l2017 CAF Africa Cup of Nations qualifier defeat to Zimbabwe on Sunday.

The Jomo Cosmos midfielder played only 15 minutes for the Flames in Harare before being replaced by Bullets burly striker Muhammad Sulumba. It is reported that the former Blue Eagles winger did not approve of his substitution and did not embrace a traditional handshake.

However, the player is said to have told local media following his return that he was shocked Mtawali did not explain his early substitution, or his failure to make the Cosafa squad for the tournament hosted in Namibia.

According to an unnamed soccer analyst quoted by the website, Mhone's exclusion was a double blow for a player who attracted scouts for possible deals overseas.

“What he is doing is wrong because he keeps on changing his team. Micium has been loyal and toughened by South Africa's PSL as compared to budding Isaac Kaliati who has replaced him,” the analyst is quoted as saying.

The Flames are scheduled to kick-off campaign in Windhoek against the Palancas Negras of Angola this coming Sunday, June 12 at the Independence Stadium.