Zimbabwe 2-2 Swaziland - AS IT HAPPENED 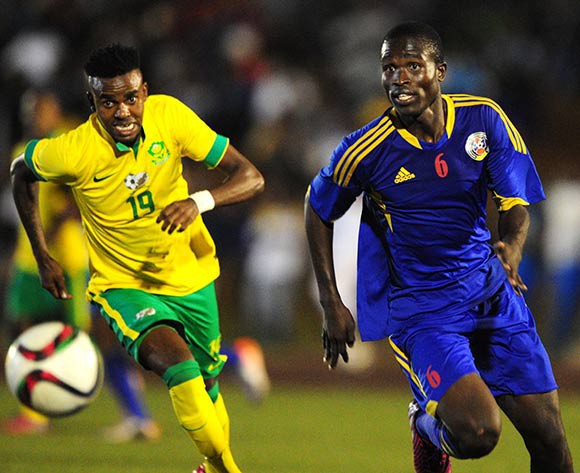 Sanele Mkhweli of Swaziland challenged by Jabulani Shongwe of South Africa during the International Friendly match between Swaziland and South Africa at the Somhlolo Stadium, Lobamba on the 25 March 2015 ©Muzi Ntombela/BackpagePix

Good afternoon and welcome to AfricanFootball.com for out live coverage of the 2016 Cosafa Castle Cup clash between Zimbabwe and Swaziland from the Sam Nujoma Stadium in Windhoek, Namibia.

85' - Chance! What a chance for Badenhorst to complete his hat-trick, but he fails to direct his header on target from close range.

64' - PENALTY! Referee points to the spot following a handball in the area by Zimbabwe captain Danny Phiri.

54' -  Chapapiwa on for Kangwa - Zimbabwe substitute

52'- CHANCE! Great chance for Swaziland to double their lead. Tsabedze slips in behind the Zimbabwean defence, but his is unable to find the back of the net with the goal at his mercy.

37'- Chance after chance for Swaziland who have been all over Zimbabwe in the first-half.

32' - CLOSE! Spectacular attempt by Njabulo Ndlovu who's bicycle kick has the Zimbabwean goal-minder worried...the Swazi international unlucky to see his effort sail just over the crossbar.

30'- Half-hour played in Windhoek, Swaziland been the better side and deservedly lead their Southern African counterparts 1-0.

21' - Mukuruva forced into another save, this time the Warriors goalkeeper does well to keep out a teasing ball from Muzi Dlamini.

17' - GOAL! Top finish by Kaizer Chiefs target Felix Badenhorst - the Mbabane Swallows striker beats the offside trap, running onto a long ball over the top of the Zimbabwe defensive line to head home the opener.

14'- Good goalkeeping by Mukuruva who is off his line in a flash to clear from danger.  Positive start by Swaziland who are desperate make their mark at this year's tournament.

4' - First chance of the match falls to South Africa-based Charlton Mashumba who's shot flies over the crossbar.

- All set for the first game of the tournament. Four-time champions Zimbabwe taking on Swaziland in a Group A clash.