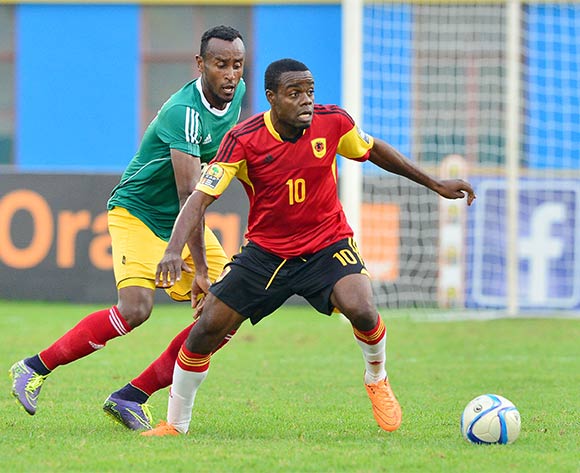 Quibeto Manguxi of Angola shields ball from Tesfaye Alebachew of Ethiopia during the 2016 CHAN football match between Ethiopia and Angola at the Amahoro Stadium in Kigali, Rwanda on 25 January 2016 ©Gavin Barker/BackpagePix

Good afternoon and welcome to AfricanFootball.com for out live coverage of the 2016 Cosafa Castle Cup clash between Angola and Malawi from the Sam Nujoma Stadium in Windhoek, Namibia.

89' Malawi awarded a penalty and Mhango steps up, and makes it 3-0 to the Flames - grabbing his hat-trick in the process

85' De Camro has a chance to net Angola's first goal from a free-kick, but his attempt flies over the Malawi goal-posts

67' GOOD SAVE! Bunga pushes away Phiri Jr's curling attempt from a corner-kick

61' GREAT SAVE! Bunga finger-tips Kaliati's effort over the crossbar as Malawi look to double their lead

45' The fourth official has added one minute

43' Palancas Negras defender Monteiro is down injured and play is halted. Malawi 1-0 Angola

37' Angola have a chance to equalize from a free-kick, but Swini collects with ease inside the Malawi goal-posts

32' GOAL! Mhango scores with a deflected header to put Malawi into the lead

27' Another chance for Malawi as Mhango brings down Phiri Jr.'s cross inside the Palancas Negras box and the former fires inches wide of the upright

19' CHANCE!! Kalaiti's cross finds his Malawi teammate Msowoya inside the box, but the latter's header hits the crossbar

13' Angola forward Oliveira scores, but the match referee blows his whistle for offside