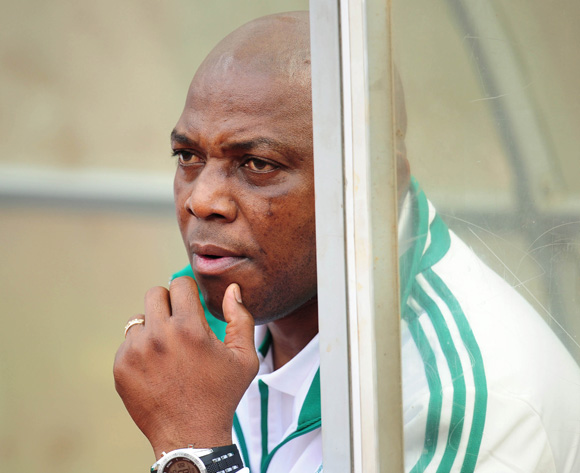 Stephen "Bobby Moore" Keshi, was my childhood play mate, my youthful and faithful companion; he was a brother, a teammate and my captain.

READ: How best to immortalise Keshi

We ate from the same plate at each other's houses. We were friends since our pre-teen age, and followed the same football career path.

He was personable, shy, humorous, charismatic, and disciplined as an individual and as a captain. He was not a womanizer; he never skipped camp to go partying, in fact, he detested that wholeheartedly. Hence, he led by example.

During his speech at a Greater Tomorrow event,in 2014, where we presented computers, laptops, a generator, ceiling fans and a printer to Saint Paul's Primary School, Apapa Rd, Ebute-Metta, Mainland, Lagos, he said,  "Lucky, 'Johnny Rep' Okoku, is not my friend, he is my brother...." Lucky was my birth name while Paul was my baptism name.

Anyway, it speaks directly to his character of unbiased and unassuming leadership and his father-benevolent approach and direct action to humanity where he co-donated (with me and Godwin Odiye), computers, laptops, printer, generator, etc. to St. Paul's primary school.

He was a marvelous guy and a gentleman, but widely misunderstood by so many. He made time for the Abuja's orphans and less privileged children and took pictures with them during the launch of Greater Tomorrow Children's Foundation.

He graced Greater Tomorrow Children's Foundation to celebrate Children's Day and World's Hunger Day as his own way of giving back to the community. He received the highest Mainland humanitarian award for his giving back to the society that supported him.  That was Stephen, an ambassador for goodwill.

He was a true Christian; he epitomized what it meant to be a devoted and loyal Catholic growing up with him during our pre-teen age and until his death, he remained a true and believer in the doctrine and teachings of Catholic principles.

We attended St. Paul's Catholic Church, at Denton / Oyingbo, together. We particularly preferred the 6am mass because it gave us enough time to get back home and rush to Morocco for Seven Planners Youth club's tournaments.

It was during this youth club participation that the founder of the club, Mr. Gomez, nicknamed us after the 1970s World Cup stars. Stephen was named after the England captain, Bobby Moore, while I was named after the Dutch great, Johnny Rep (not republic), Simeon Alada was "John Billy Bremna" Scottish great, Patrick Macauley was "Piedro Anastasia," Italian great, Emmanuel Akpan, was Fabio Capello, Italian great, etc. Stephen and I thought that Raymond King, our goalkeeper at Seven Planners then and at St. Finbarr's College, was given to him by Mr. Gomez.

We also played together for Greater Tomorrow under the Nigeria Football Association (NFA), as the curtain raisers to entertain the crowd before big named clubs and national teams played. We were sponsored by NFA to attend the coaching clinic organised by Pele himself at the Liberty stadium. This was in 1976, when we, as a team, traveled from Lagos to Ibadan to meet with Pele of Brazil. He captained the team then as well.

We also served as ball boys with Henry Nwosu. Stephen was my captain at St. Finbarr's College, Akoka, Lagos, where we stayed at the boys' quarters in the school's compound for two years consecutively, courtesy of the principal, Mr. Kpotie.

He took his education seriously then as he did at the primary school level. He would abandon vital games during soccer season for his classes. He was also my captain in the 1980s when we played for the then Green Eagles team B as the feeder to Green Eagles' team A.

It was from the team B that he got a call in to the Green Eagles team A. He came in as a substitute during the 1982 World Cup qualifiers against Algeria, at the National Stadium in Lagos.

Since that very moment in time, and in his accomplished life, he went on to play and captained Nigeria for the next fourteen years. I can remember very clearly his excitement and thanksgiving to God when he was named the new Super Eagles coach in November of 2011.

I called to congratulate him when he was in Nigeria, and we were on the phone for over two+ hours. Sadly, that excitement later turned sour which brought him stress, sadness, despair, depression, distress to his personal and professional life and it proved deadly in the end. He expected to have been treated with reverence which every human being deserves.

"How come the things that make us happy make us so sad"? Frankie Beverly asked.

He was my teammate and captain during the 1984 African Cup of Nations, when we won the silver medal. The youth teams he and I played for together in addition to the aforementioned: Olaleye boys club, Iponri, Seven planners, Morocco, Seven Pillars, Mushin Olosha, Seven Scorpions,Masha, YSFON, etc. These teams kept us busy and off the streets.

He cared and helped the underserved children with their social, academic and physical development of which many were unnoticed because he didn't want any credit for them. He was committed to humanity, to the less privileged children to be specific.

He supported, embraced and welcomed my initiative to bring to the forefront, the neglect and forgotten students of the primary schools, and their decapitating buildings with no technology or library to advance and enhance their education. That was why he suggested increasing the number of the computers that we donated to St. Paul's.

As a result, Mainland local govt. has converted and made the computer lab at St. Paul's primary school accessible to all the entire students of the City of Mainland because until we donated the computers, they only had one computer lab in Sabo, where the students have to risk their lives two, three times a week, in public transportation to Sabo in the name of technology.

He valued education as evidently here, when he asked for the support of his world renowned star players in Joseph Yobo, Mikel Obi and Vincent Enyeama, to hold the Greater TomorrowChildren's Foundation's banner and take pictures with it to promote and support his dedication to his cause.

They obliged without any questions. Stephen was a virtuoso and an iconic personality, a great father, a loving and faithful husband to Kate, a devoted and loyal friend, a role model to his children, colleagues, friends and admirers alike, a father figure to many as well.

He was a God-fearing man, honest and humble. BUT AGAIN, WIDELY MISUNDERSTOOD BY MANY who never even got closed to him but was unfairly judged from a distance.

I can say all of these attributes and qualities that he possessed because I witnessed them growing up with him as pre-teens, through his adolescent living to his adulthood. These are facts.

Stephen ‘Bobby Moore's’ humble beginning, he did lots of domestic chores for his parents, and as a child, he helped his mom to sell yam to put food on the table, other times, as a student at Premier College, before going to school in the afternoon, he would carry yam on his head, in the morning, trek miles through the railway line to Oke Ira, from Ojo Niyun street, Ebute-Metta, to deliver to his late mom at the Tejuosho market and then rushed home to get ready for school. This, he did, even when he was in primary school.

I was doing the same thing for my late mom, in my case, it was bread. There's so much to talk about his humble beginnings that only a book with thousands of pages will suffice.

Stephen's sense of humour and he had more of this. In 1979, during the St. Finbarr's College's senior lit, DJs Skelly Moore and Stevo Ree were blasting "Don't Stop 'Til You Get Enough," a track from Michael Jackson's "Off The Wall" album. ‘Bobby Moore’ got up like every other male student in the hall to ask the girls for a dance. Unfortunately, every girl he asked to dance with refused him and so he carried a bench, took to the dance floor and started dancing with the bench. Yep, he did and we had a good laugh afterwards in our way home. That was Stephen. Betcha!

I am happy and pleased to see the public outpouring of condolences. It is a befitting and welcoming development, the one that sends a shock wave through my spine. He would have appreciated it even more in living, appropriately.

He seemed though that he was more popular in death than when he was living. Stephen's happiest moments when he took charge of the Super Eagles was when he was with his childhood friends he trusted.

He executed his national coaching tasks, assignments and responsibilities flawlessly and professionally, with the utmost financial sacrifice that brought the nation a flood of relief when his team won the 2013 AFCON tournament after 19 years. He was our nation's pride, the face of Nigerian football.

Just as he was about to get an opportunity for a chance to start all over he was called upon by the most high, Almighty God.

On Friday, June 10, 2016, I had driven out of my house basement garage, not realising how closed my vehicle was to the building. I was still absent minded, in a daze from Stephen's demise, with heavy eyes from lack of sleep, thinking about him, I dented my vehicle, and left a stretch of huge and noticeable scratches. This vehicle has lost its value and will never be the same. I told Keshi. I will not fix the damage but instead, it will serve as a reminder of you.

Thank you for your friendship, your companion, your sacrifices and dedication to less privileged children, for humanity and Greater Tomorrow Children's Foundation.

Say me well to Kate.