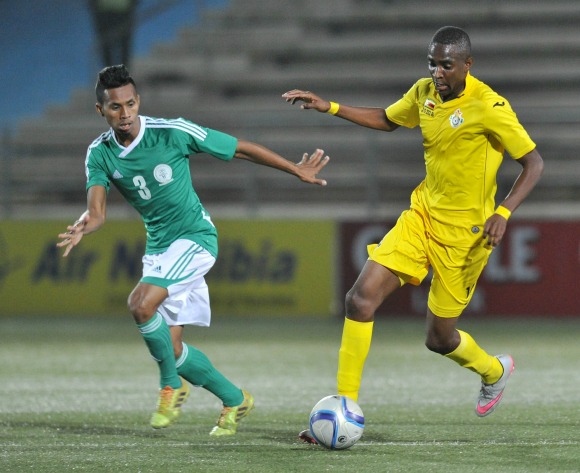 Tantely Randrianirina of Madagascar challenges Tafadzwa Kutinyu of Zimbabwe during the 2016 Cosafa Cup match between Madagascar and Zimbabwe at Sam Nujoma Stadium in Windhoek Namibia on 13 June, 2016 ©Muzi Ntombela/BackpagePix

Madagascar held Zimbabwe to a goalless draw in a 2016 Cosafa Castle Cup Group A clash at the Sam Nujoma Stadium on Monday evening.

The Warriors were made to rue several missed chances throughout the match. Two draws in two matches leaves the four-time Cosafa Cup champions on the cusp of elimination.

For the Malagasy, victory over Swaziland on Wednesday evening will book their place in the knockout stages of the competition and subsequently set up a clash against Zambia.

Zimbabwe need to rely on Madagascar and Swaziland playing to a goalless stalemate, while they have to beat the Seychelles by more than four goals if they were to stand any chance of progression in the tournament.

Obidiah Tarumbwa squandered a golden chance to put Zimbabwe 1-0 up after 16 minutes. The AmaTuks striker scuffing his effort over the crossbar with the goal at his mercy.

Bruce Kangwa had a chance to steal the headlines in the 81st minute. The ball fell for the Zimbabwe striker inside the area, but despite having a clear shot at goal, he could only manage to steer his shot straight at the grateful Chretien Andriamifehy in the Barea goal.

Madagascar and Swaziland played each other at the same stage of last year's showpiece with a 1-1 draw sending the Islanders through to the knockout stages. They eventually ended third - their best ever showing at the Southern African competition.