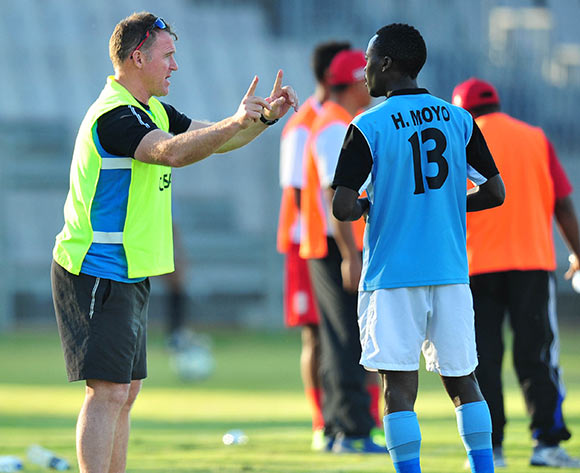 Peter Butler, coach of Botswana talking to his player during 2015 Cosafa Cup 3rd and 4th Place match between Madagascar and Botswana at Moruleng Stadium, Rustenburg on the 30 May 2015 ©Muzi Ntombela/BackpagePix

Botswana head coach Peter Butler has confirmed that they will travel with 15 players for their first 2016 COSAFA Castle Cup game in Namibia.

The Zebras are scheduled to face the Brave Warriors of Namibia in a quarter-final encounter at the Sam Nujoma Stadium in Windhoek on Saturday.

Butler's side have been affected by the beMOBILE Premiership title decider between Township Rollers and Mochudi Centre Chiefs which takes place on Wednesday.

Nine players belonging to the two clubs had to leave the Zebras camp and the English tactician has stated that he would use the players who stayed in camp.

“I am going to run with a 14-man squad, plus a goalkeeper for the Namibia (encounter)," Butler told local media.

"I won’t use the players that will participate in the play-off game. It’s not right. I can’t use players that we didn’t work with prior to the game," he added.

“It’s actually dangerous if one of the players had to play and then travel all the way to Namibia.

"I force him to play and he suffers a seizure or heart attack, who takes the blame?” Butler concluded.

The Zebras are expected to leave for Windhoek, Namibia by road on Thursday.