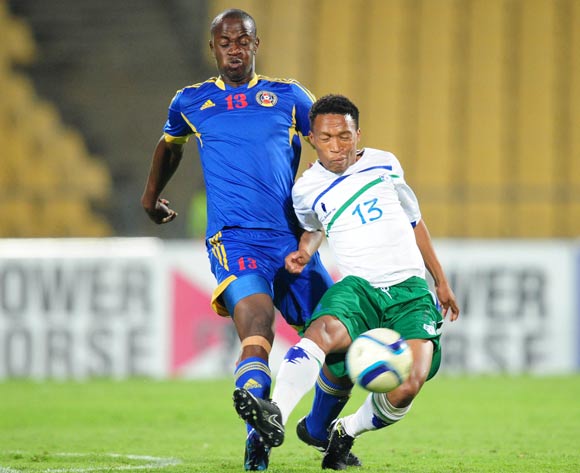 Mohau Rammoneng of Lesotho challenged by Siboniso Malambe of Swaziland during the 2015 Cosafa Cup match between Lesotho and Swaziland at the Royal Bafokeng Stadium, Rustenburg on the 20 May 2015

Information coming out of the Swaziland camp is that coach Harries Bulunga will miss the services of defender Siboniso Malambe for the rest of their 2016 Cosafa Castle Cup campaign.

The Times of Swaziland website has it that the Royal Leopards stalwart flew to the OR Tambo International Airport from Namibia on Tuesday following the passing of his mother.

Isihlangu Semnikati are getting ready to face off against Madagascar and have already bagged a win and a draw to top the group with four points, heading into the final group game.

Victory will see them reaching the quarterfinals and set up a date against Chipolopolo of Zambia on Sunday.

“It is true, ‘Rocco’ was released from the national team as he is bereaved. He lost his mother and had to be home as this is one tough and sad situation for him and his family,” said National Football Association's Media Officer, Muzi Radebe.

“It is the whole country that should mourn the player’s situation as he was out representing the country when the ordeal occurred.

“We pray and believe God will be with them at this sad moment.”

Although the defender was yet to feature for Isihlangu, Bulunga is set to miss his experience and inspiration in the team.

Their match against the Malagasy is set to kick-off at the Independence Stadium on Wednesday afternoon at 17h00.