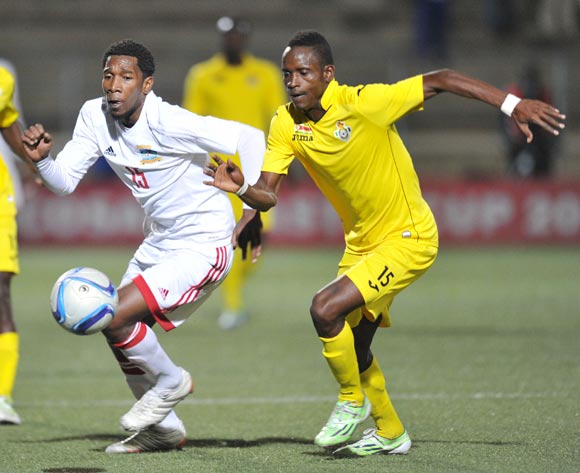 Carl Hopprich of Seychelles challenged by Nqobizitha Masuku of Zimbabwe during the 2016 Cosafa Cup match between Zimbabwe and Seychelles at Sam Nujoma Stadium in Windhoek Namibia on 15 June, 2016 ©Muzi Ntombela/BackpagePix

Good afternoon and welcome to AfricanFootball.com for out live coverage of the 2016 Cosafa Castle Cup clash between Zimbabwe and Seychelles from the Sam Nujoma Stadium in Windhoek, Namibia.

85' The Warriors still doing most of the attacking

73' GOAL! Hadebe makes it 4-0 to Zimbabwe from a corner-kick. The Warriors are in complete control of the game

71' Zimbabwe sub: Kutinyu OUT, Manure IN

37' GOAL! Mudehwe makes it 2-0 to the Warriors of Zimbabwe with a good header

23' GOAL! The pressure finally pays off as Pfumbidzai converts from the spot to make it 1-0 to Zimbabwe

18' Another attack from the Warriors and this time, Mudehwe bursts into the Seychelles box, but he runs out of steam