Malawi 0-1 Lesotho - AS IT HAPPENED 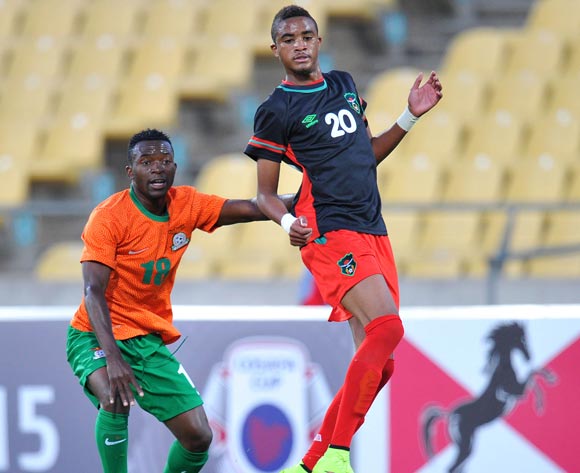 Gerald Phiri of Malawi challenged by Emmanuel Mbola of Zambia during the 2015 Cosafa Cup Plate Finals match between Zambia and Malawi at Royal Bafokeng Stadium, Rustenburg on the 29 May 2015

Good evening and welcome to AfricanFootball.com for our live coverage of the 2016 Cosafa Castle Cup clash between Malawi and Lesotho from the Sam Nujoma Stadium in Windhoek.

- Lesotho will face South Africa in the quarterfinals on Saturday.

84' - GOAL!!!! Lesotho snatch it at the death and surely they will advance to the knockout stages of the competition. Perfect cross by Seakhoa headed in at the back post by Thaba-Ntso.

76' - Final sub for Malawi - Wadabwa comes on for Phiri. Can he change things around? Still goalless.

71' - Sulumba!!! - Close - the Malawi striker finds a pocket of space on the edge of the area, but fails to hit the target with his stinging effort.

69' - Lesotho continue to stand firm - sitting deeper and deeper as Malawi push for the decisive goal.

60' - Hour played in Windhoek. Malawi still pressing for the opener. As it stands Lesotho will progress to the knockout stages.

54' - CLOSE! Ball sits up for Mhango who's acrobatic effort flies just over. Motebang comes on for Lesotho....

45' - GREAT SAVE! Swini denies Kalake who's left-footed shot was heading for the top corner.

30' - CHANCE! Seturumane blazes his marker, but fails to beat the Swini who is well positioned to make what is ultimately an easy save.

24' - Still goalless in the Namibian capital. Just a reminder that Malawi have to win if they are to progress to the knockout stages of the competition.

16' - Potloane breaks free down the left flank and tries his luck from an acute angle....very ambitious...and it shows as the ball flies well wide.

9' - Phiri again tries his luck, but this time his shot flies well wide. Malawi making their intentions clear from the get-go.

5' - Positive start by Malawi who go close through Gerald Phiri Jnr. The Bidvest Wits midfielder denied on two occasions in quick succession by the Lesotho goal-minder.

- Malawi need to win to book their place in the quarterfinals. A draw would be enough for Lesotho to progress. The winner of Group B will face Bafana Bafana in the last eight.