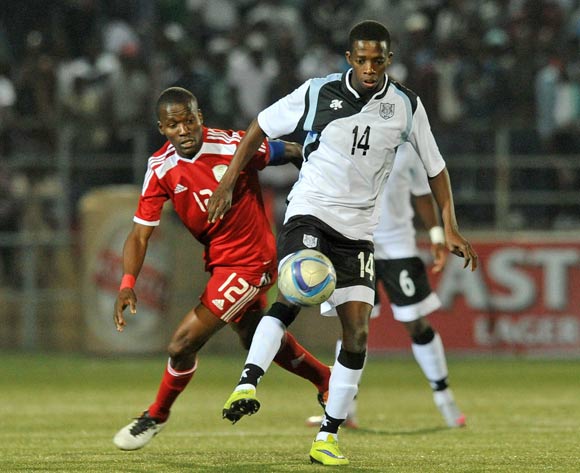 Thabang Sesinyi of Botswana challenged by Chris Katjiukua of Namibia during the 2016 Cosafa Cup Quarterfinals match between Botswana and Namibia at Sam Nujoma Stadium in Windhoek Namibia on 18 June, 2016 ©Muzi Ntombela/BackpagePix

Namibia were defeated 5-4 on penalties by Botswana in the 2016 COSAFA Castle Cup quarter-final clash at the Sam Nujoma Stadium in Windhoek on Saturday night.

As a result, tournament hosts Namibia will be unable to defend their title, while the Zebras of Botswana progressed to the semi-finals.

The Brave Warriors dominated possession in the opening stages of the game, while looking to grab an early goal against the Zebras

Wangu Gome was fouled on the edge of the Botswana box in the 30th minute, but the Zebras cleared the resultant set-piece.

The Zebras did silence the Sam Nujoma Stadium when Dacosta Angula netted an unfortunate own goal in the 50th minute.

Onkabetse Makgantai nearly made it 2-0 to Botswana seven minutes later, his shot was saved by Maximilian Mbaeva in Namibia goal.

The hosts then took control of the game with Peter Shalulile and Hotto looking lively for the Brave Warriors upfront.

Hoaseb set-up Shalulile in the 77th minute, but the latter placed his header inches wide of the target as Namibia pressed Botswana.

The pressure finally paid off in the 85th minute when Hendrick Somaeb converted from the spot-kick for Namibia to make it 1-1.

The match went into a straight into penalty shootout after a 1-1 draw following an action-packed second-half.

Hotto’s shot was saved by Masule in sudden death and Botswana emerged 5-4 winners on penalties.